It was a cold and rainy night in Georgia (sounds like the start of a great novel, right?), and we had just over an hour on the ground between flights. The good news is that our flight from San Diego arrived in the A concourse, and our connecting flight to West Palm Beach would be departing out of concourse B. So yeah – we were spared the agony of having to do a mad dash across the entire airport to make our connection. As a matter of fact, we had plenty of time so we decided to walk instead of taking the plane train. But hey – those underground walkways between terminals is my favorite part of ATL. It’s nice to be able to go for a long walk (in general peace and quiet) after a long flight! 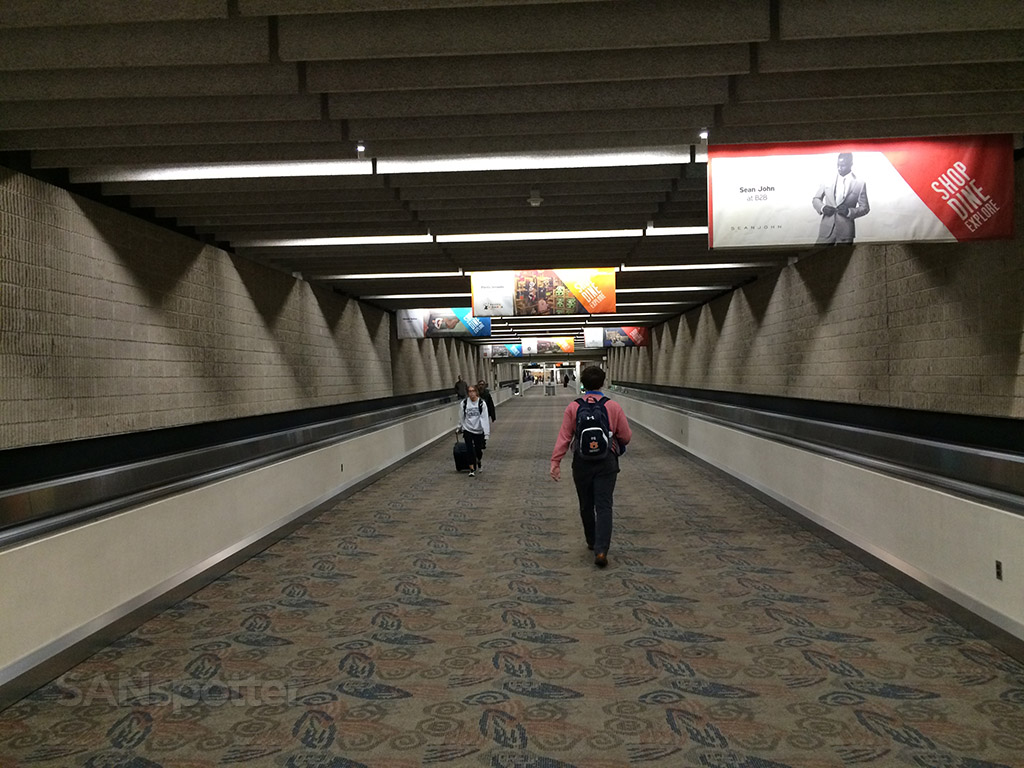 Underground walkway between terminals at ATL 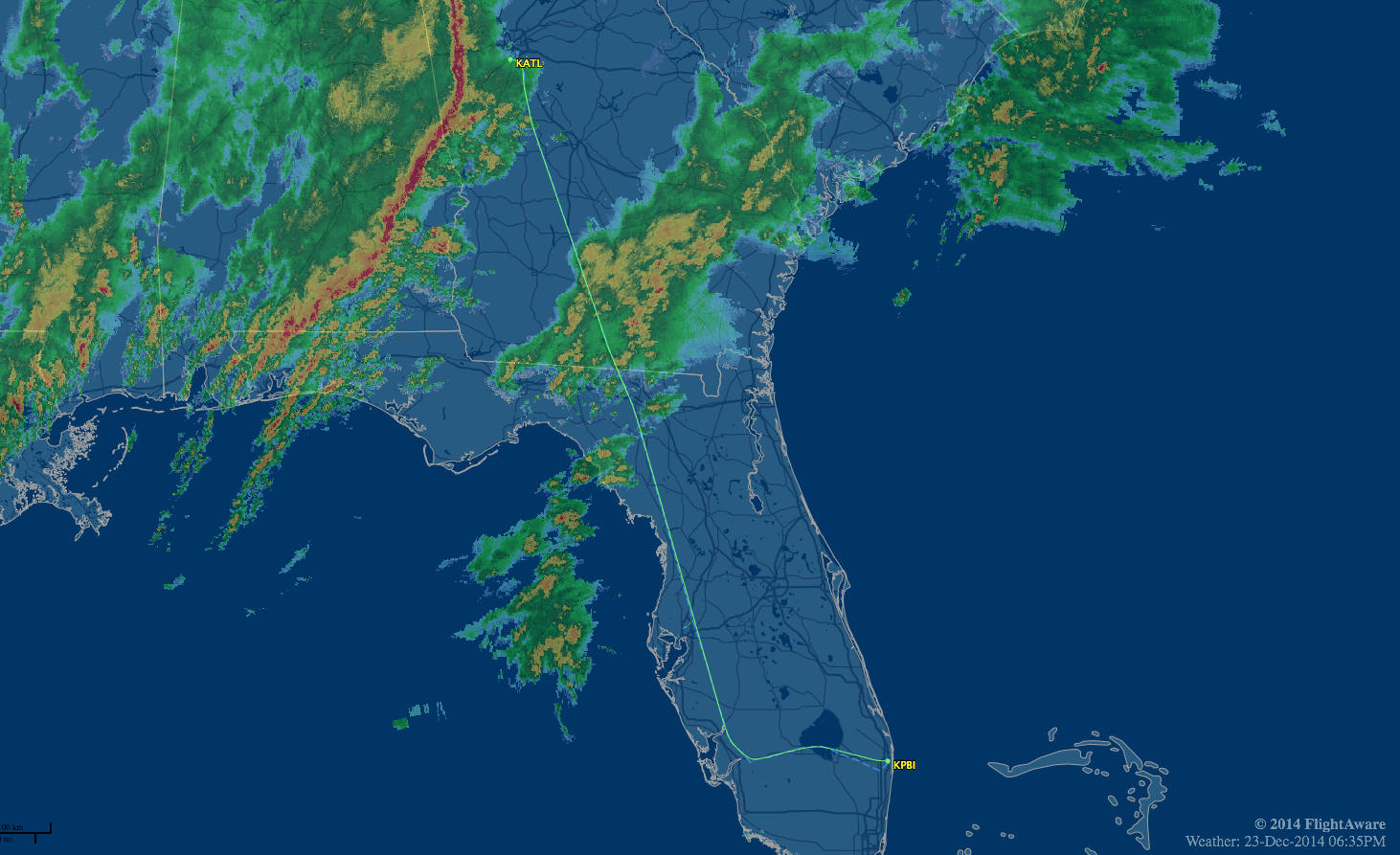 The flight down to West Palm Beach was departing out of gate B9 this evening, but there was a delayed flight still attached to the jet bridge by the time we arrived. Luckily, they were smack dab in the middle of the boarding process, so the chaos died down quickly and we were able to enjoy some time to sit and relax before this flight. Unfortunately, the lady sitting across from us was a just a bit annoyed after what I assumed to be a long day of flight delays and cancellations – she was yelling into her phone, expletives flying left and right, while her teenage son sat beside her as calm and behaved as ever. Seems she could have learned a thing or two about rolling with the punches from her son… 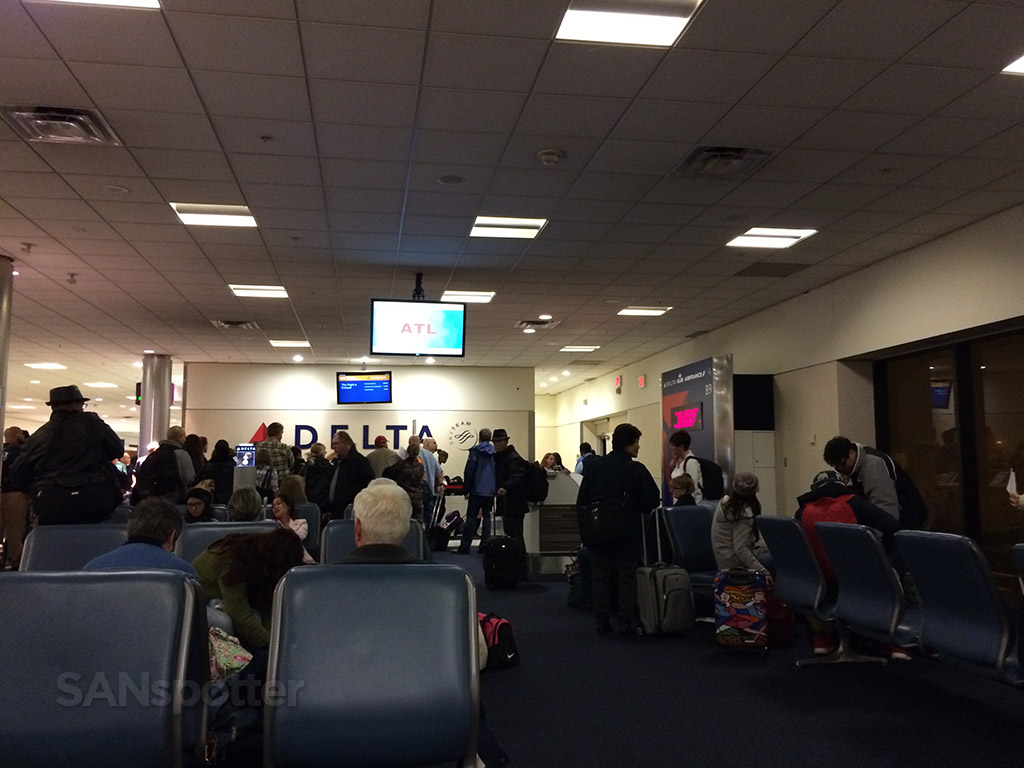 Despite the fact that the previous flight out of this gate had left behind schedule, they actually started the boarding process for ours right on time. Once again (just as I did before my previous flight), I began thinking about what first class configuration this 757 would have. Not that it really mattered, as this was a short hop down to south Florida. 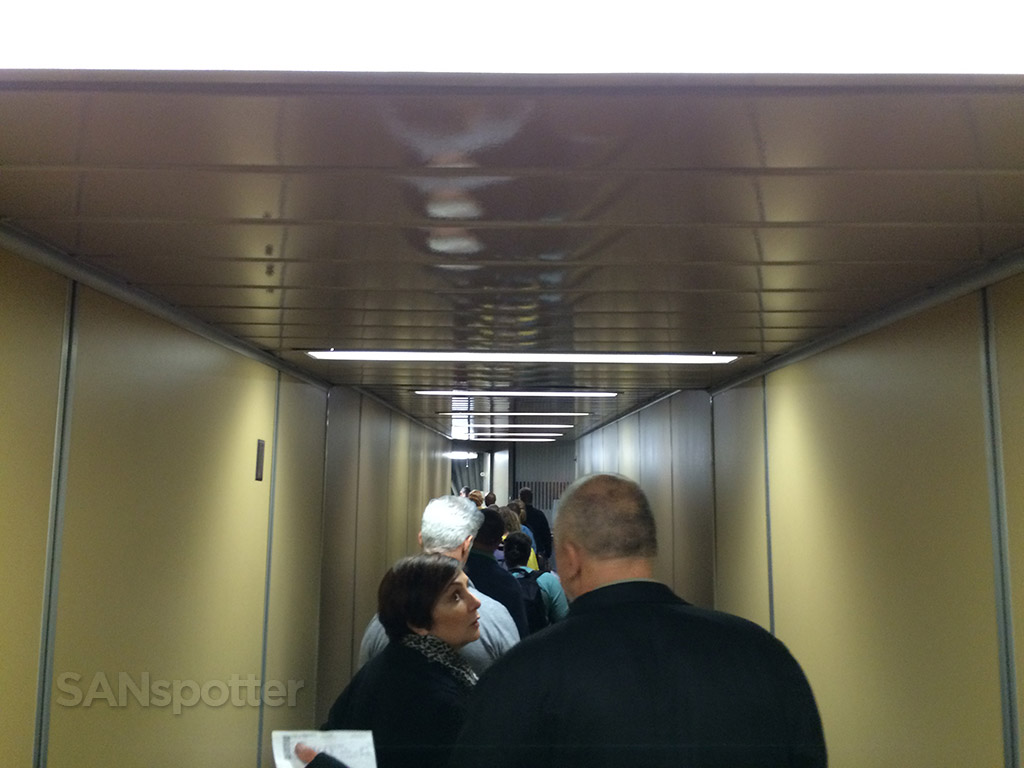 Walking down the jet bridge to our waiting 757

What we got was a newly configured aircraft, but what appeared to be a “regional” first class product. I label it as such due to the thin padding on the seats and the tray tables that drop down from the seat in front. Very economy-eque if you ask me, and I can’t imagine this configuration being used on a trans con flight. But maybe they are…I honestly don’t know. 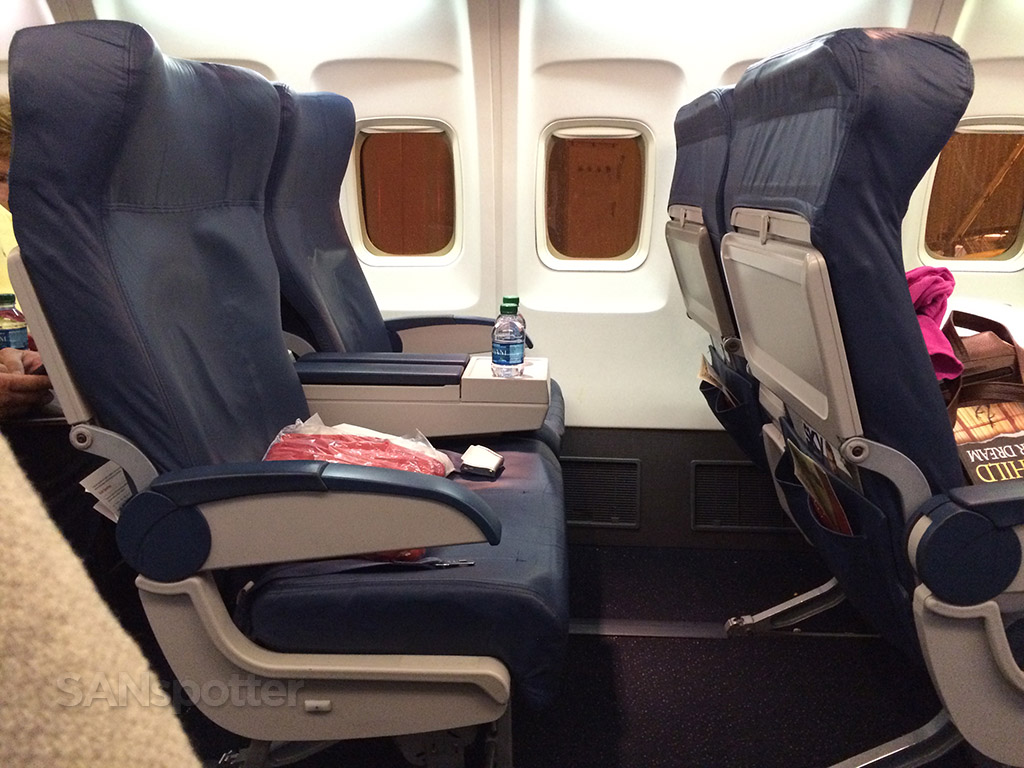 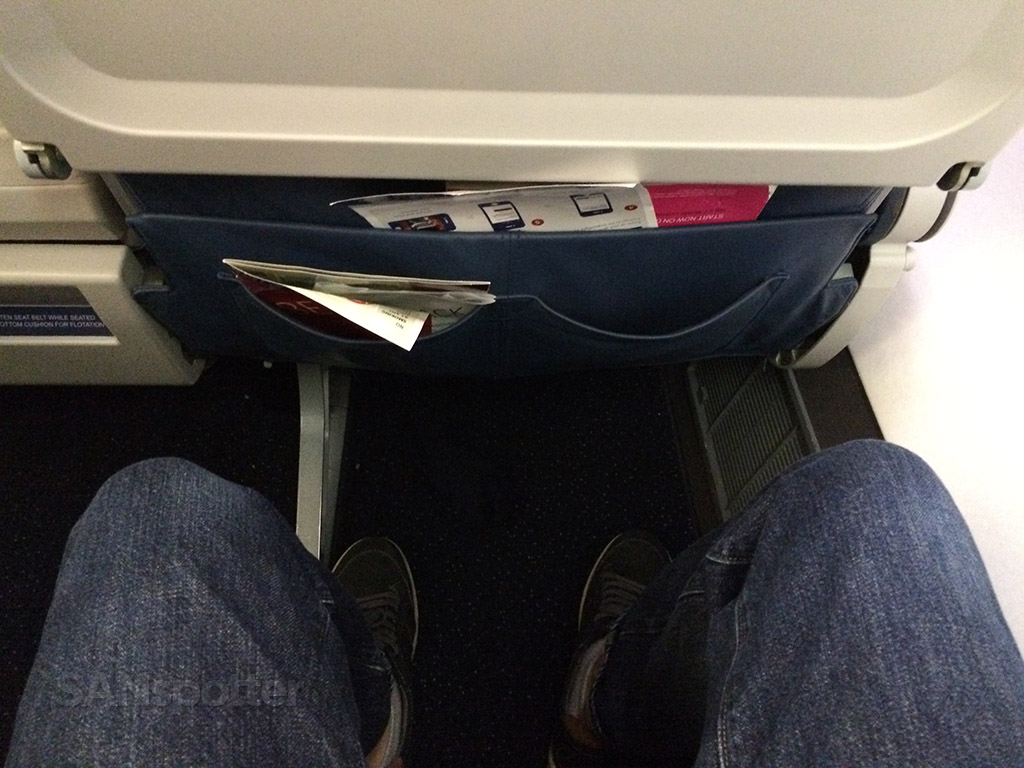 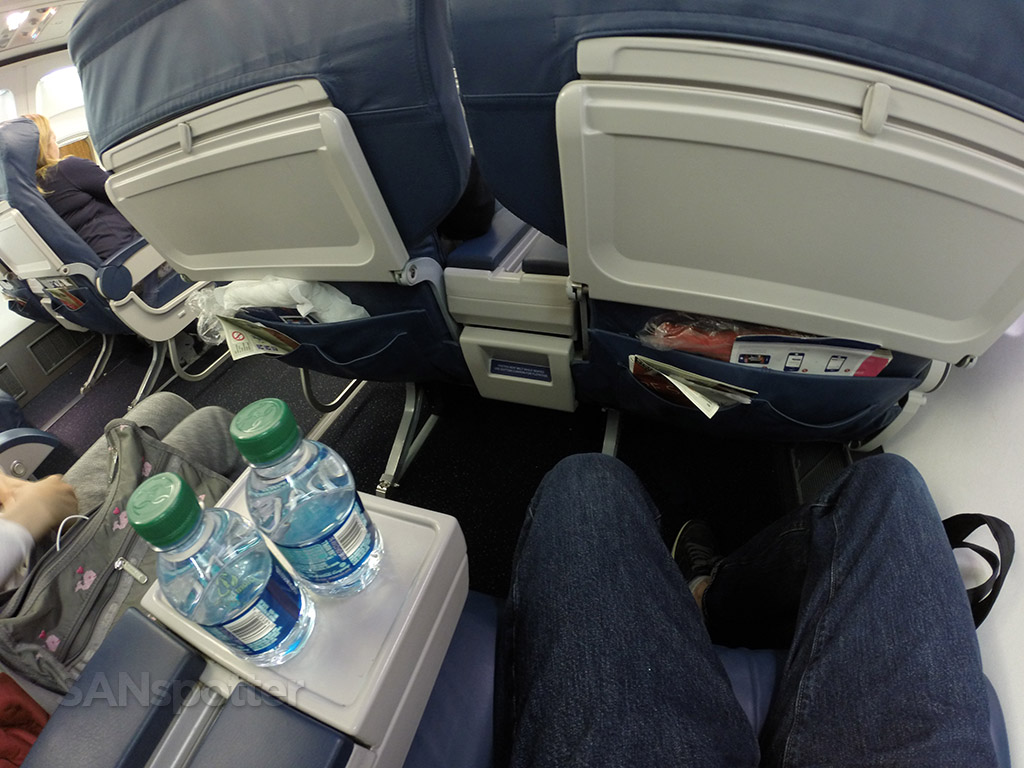 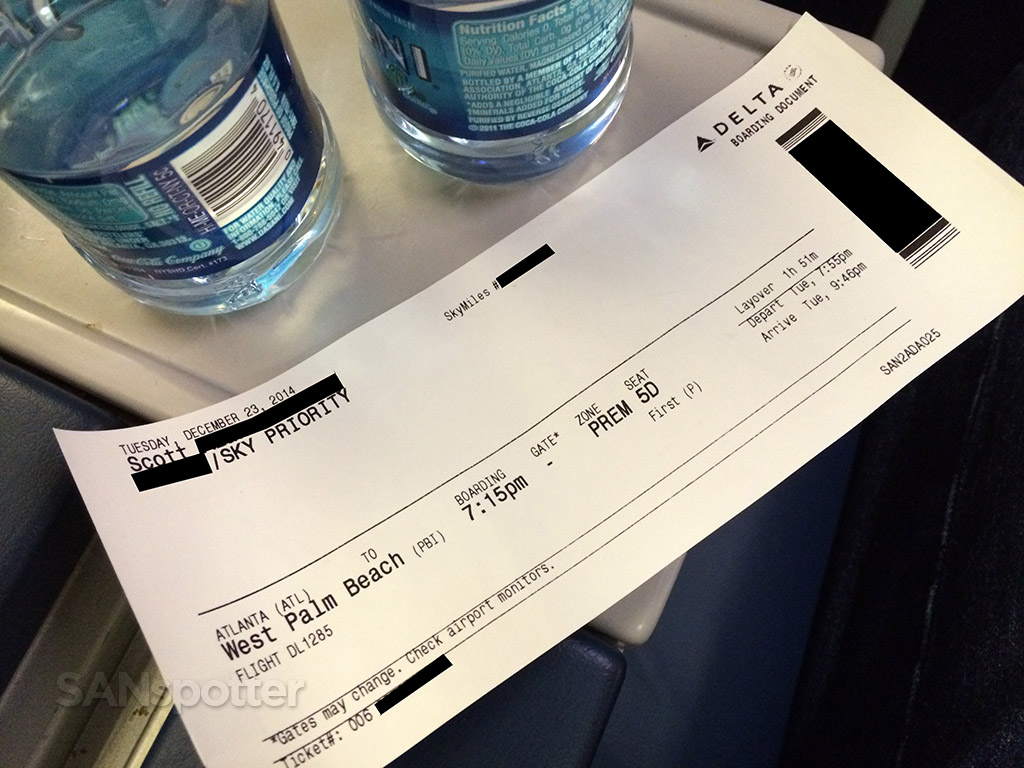 My boarding pass for ATL-PBI

Even before we sat down, it appeared that the service on this flight was going to be quite good. The flight attendants were very proactive, offering to hang coats and jackets while serving drinks in a speedy manner. Things were actually starting to feel pretty good at this point – so much so that I even texted my dad to say “we should be in West Palm Beach right on time”.

I knew I shouldn’t have done that. 10 minutes went by. 15. 20. Finally, the captain came over the PA to apologize for the slight delay, as they were working on finishing up some paperwork for a minor mechanical issue. Shortly after that, a flight attendant from the economy section came running up the aisle in panic to grab the first class flight attendants. All three then ran (in similar panic) to the back of the airplane. This back and forth lasted for several minutes, but I couldn’t really tell what was going on – but it didn’t look good. 5 minutes later, the captain made another announcement that we were still trying to accommodate late connecting passengers, and we would be on our way within minutes.

And we were. I have no idea what that panic was all about, but we ended up pushing back from the gate about 30 minutes late, which would be putting us into PBI at 10:30pm. Not really a big deal, but we had to be up at 5:30am the next morning. Each passing minute was getting harder and harder to deal with… 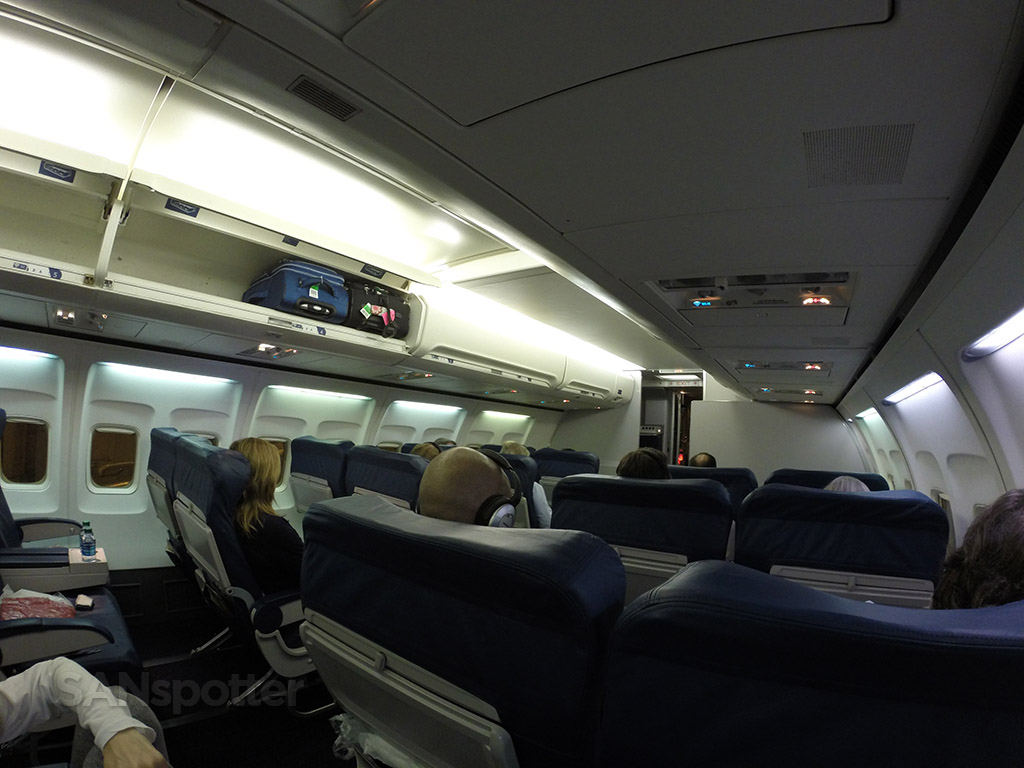 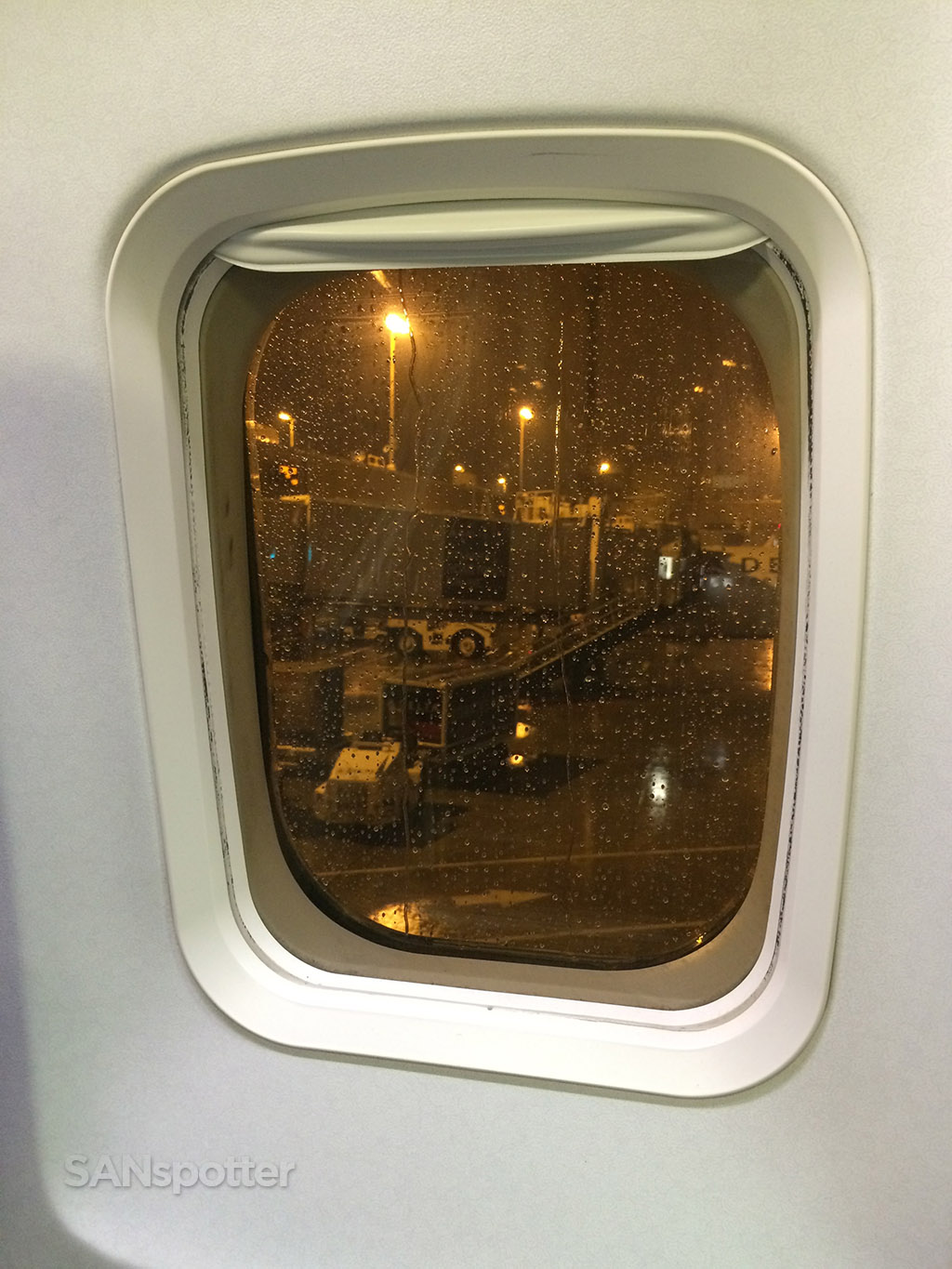 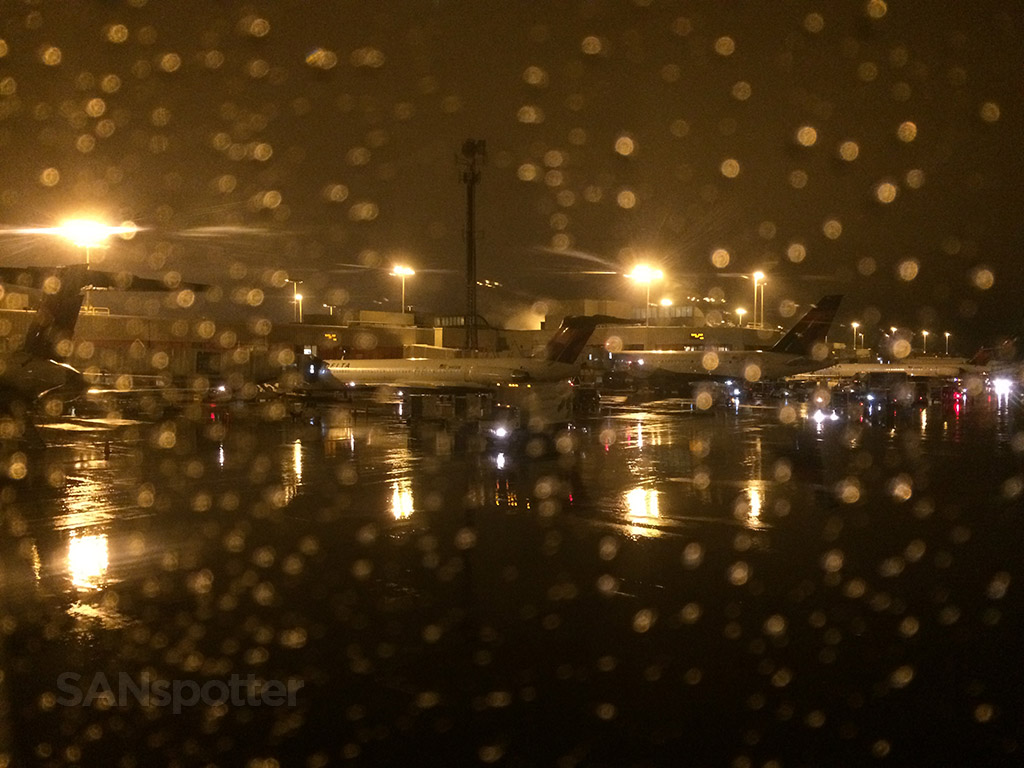 The rain was really coming down out there – it’s a good thing we weren’t delayed longer, because there was heavier rain moving in.

We were on our way after a very short taxi, and due to some weather in the area, the captain advised the flight attendants to remain seated during the climb out.

Unfortunately, we never saw the flight attendants again until the very end of the flight as we were descending into PBI. Yes, the climb out of ATL was a bit choppy, but things smoothed out 20 minutes later and there was absolutely no reason they couldn’t have resumed service after that. I’m not sure what happened in economy class, but the first class flight attendants were nowhere to be seen for the entire duration of the flight.

Not that it mattered. I had some food that I had brought aboard, and there were the complimentary bottles of water to sip on, so I’m not really complaining. These flights down to south Florida from Atlanta are usually uneventful in any cabin of service anyway, and this one was no exception. 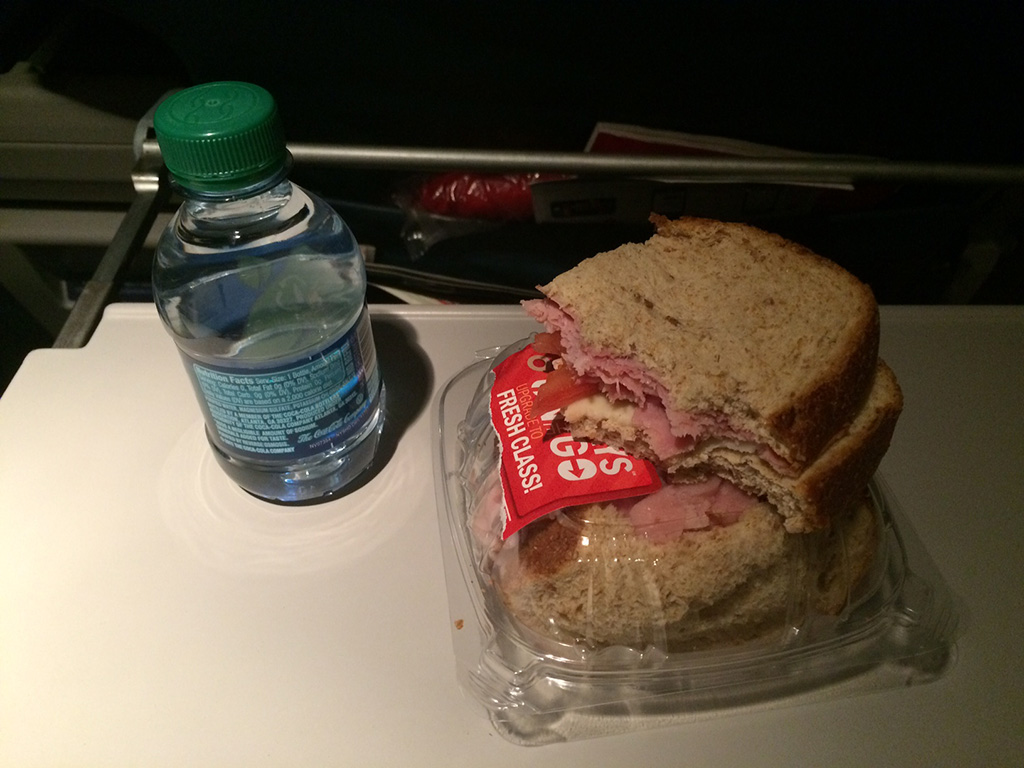 I will say, however, that it was really nice to step off the plane and feel that warm Florida air! That made me feel pretty good while I waited for our bags to arrive in baggage claim. Unfortunately, despite having bright yellow “SkyPriority” tags on them, they were some of the last ones off the plane that evening.

I’m not really sure, but I just had the feeling that everyone at Delta had just given up for the day – good customer service was severely lacking. Oh well – we were now on vacation, so no sense in overthinking it.