After a nice relaxing week in Japan visiting my wife’s friends and family, we packed up our things and headed back to the airport for the long trip back to San Diego. The week was so relaxing as a matter of fact, that I started to question the purpose of writing these trip reports. Yeah, I had totally unplugged for the first time in a long time, and getting back to the hectic world of computers, projects, and deadlines was not something I was looking forward to. Even as we arrived at the Hiroshima airport I was unsure if I would take any pics to document our journey home.

I’m very weak when it comes to this stuff though, and couldn’t resist. Within minutes I found myself snapping pics of the main terminal at HIJ: 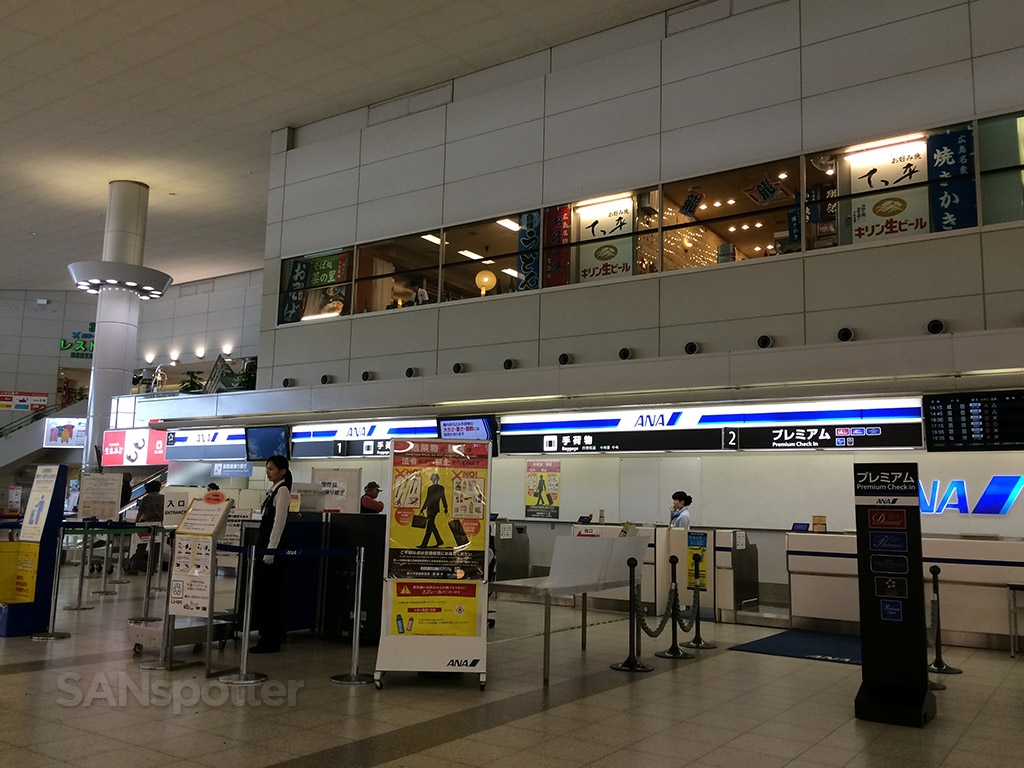 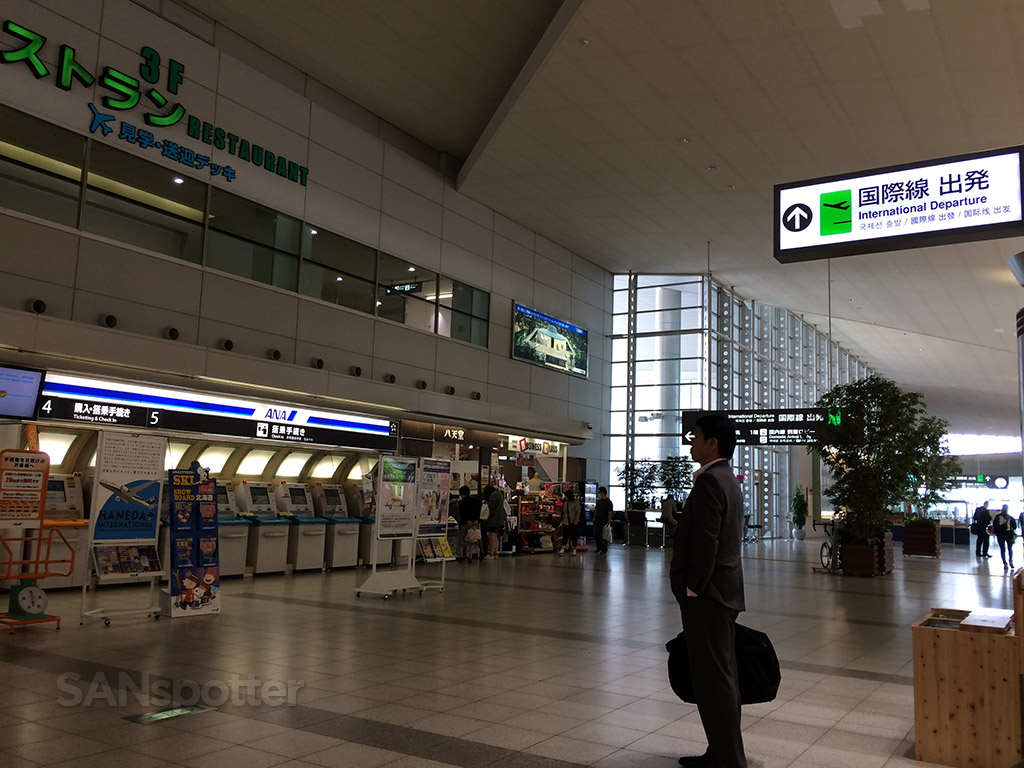 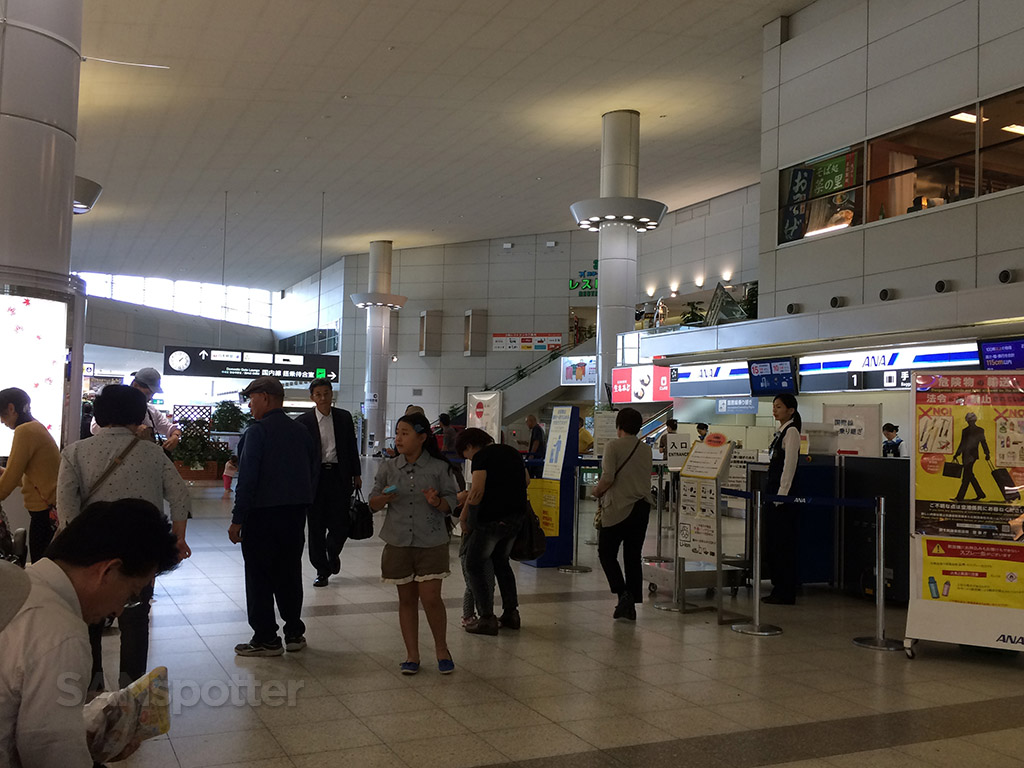 Looking east past the ANA check in counters at HIJ

Thankfully, this flight up to Narita was operated by a larger CRJ-700 as opposed to the dreaded (tiny) CRJ-200. Although I would have preferred to have a mainline aircraft for this flight, I wasn’t complaining at all. But jeez – ANA does fly 787’s between Haneda and Hiroshima so it’s a bummer that our schedule can’t make that work. CRJ it is then… 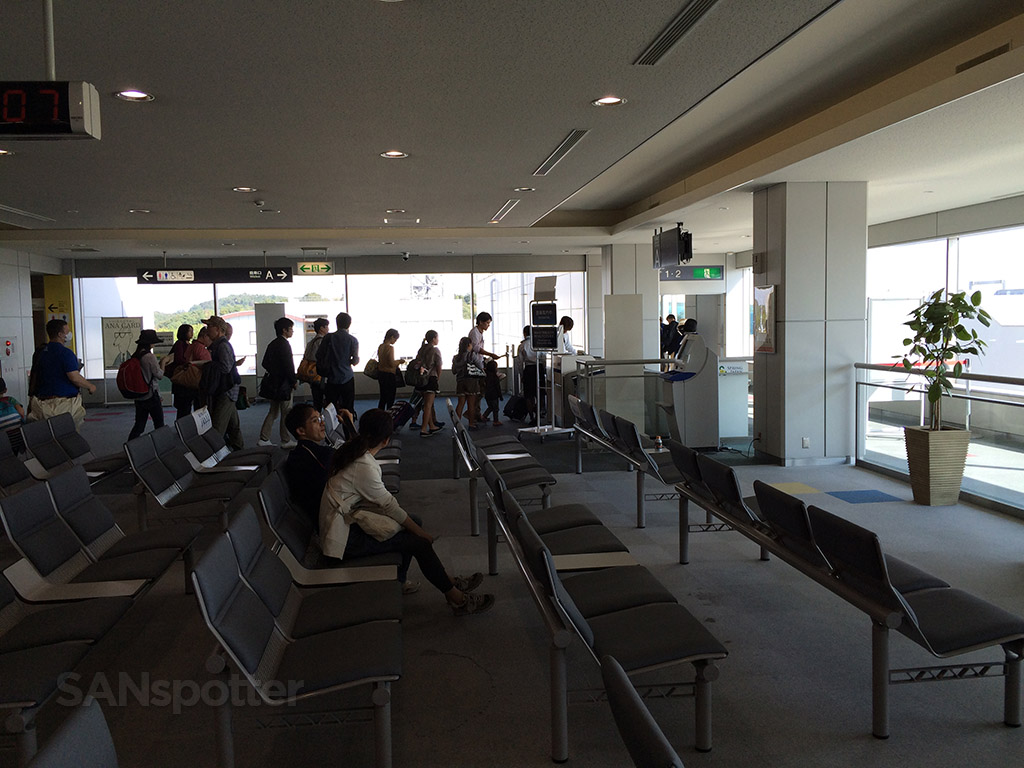 Gate area A inside the Hiroshima terminal

One of the nice things about boarding small aircraft at Hiroshima is that the aircraft are parked at a remote stand and the only way to reach them is by walking out on the ramp. There’s usually some really big 767’s and 787’s parked out there, so it’s pretty neat to get an up close and personal look at those birds. Unfortunately, there weren’t any at that time, but it was still a nice day overall and a fun walk out on the ramp anyway. 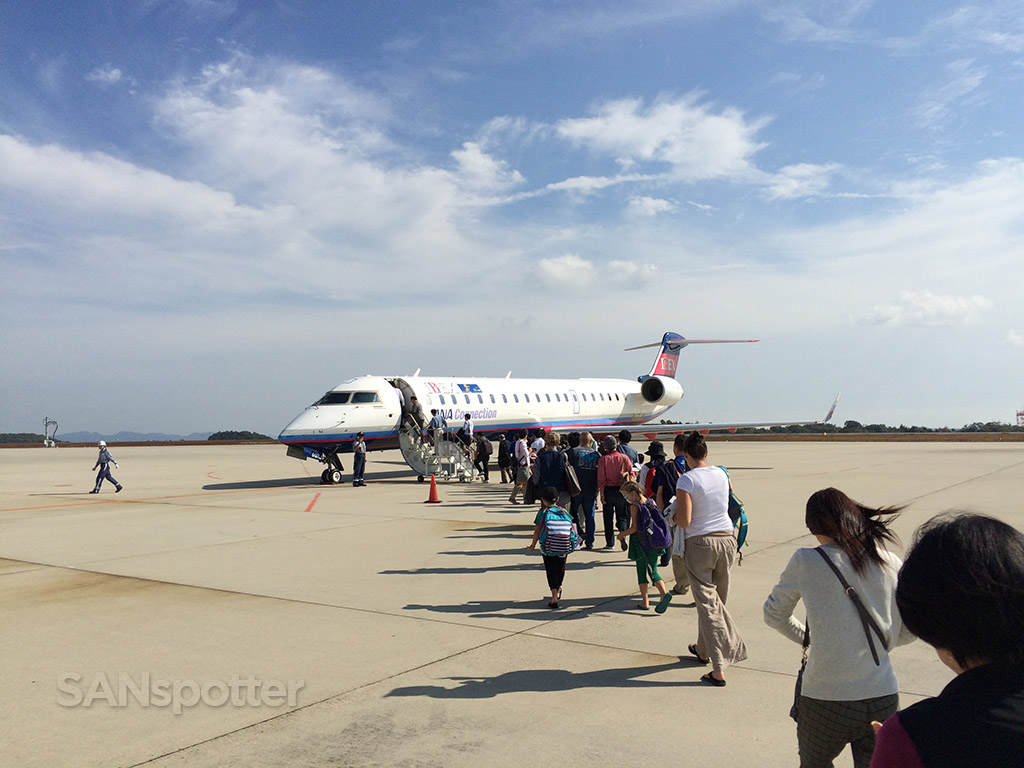 Walking out to onto the ramp at HIJ 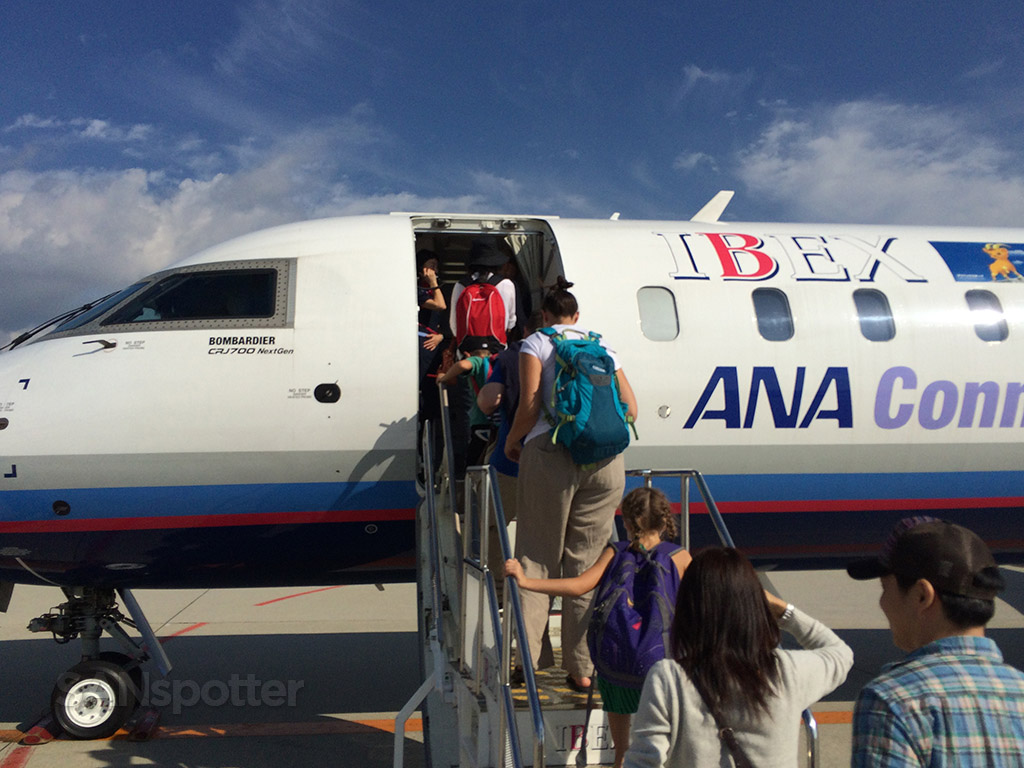 Our seats were in the very last row (20A and B), right next to the lavatory. Definitely not the best seats on the airplane, and the fact that we still had to get a boarding pass for my wife at NRT (with an already tight connection time) made me a bit nervous as we were getting settled in. But like always when I’m in a situation like this, I just try to put it out of my mind and enjoy the flight – because there’s no sense in worrying if I can’t do anything about it. 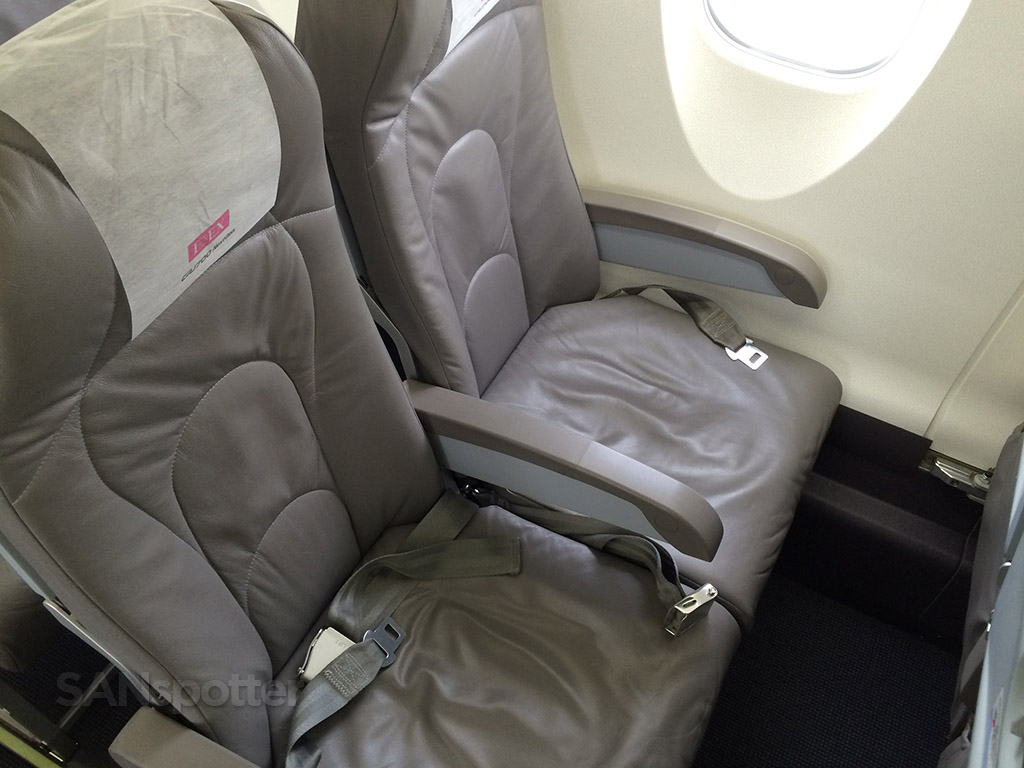 The seats on this Ibex CRJ-700 were actually pretty comfortable 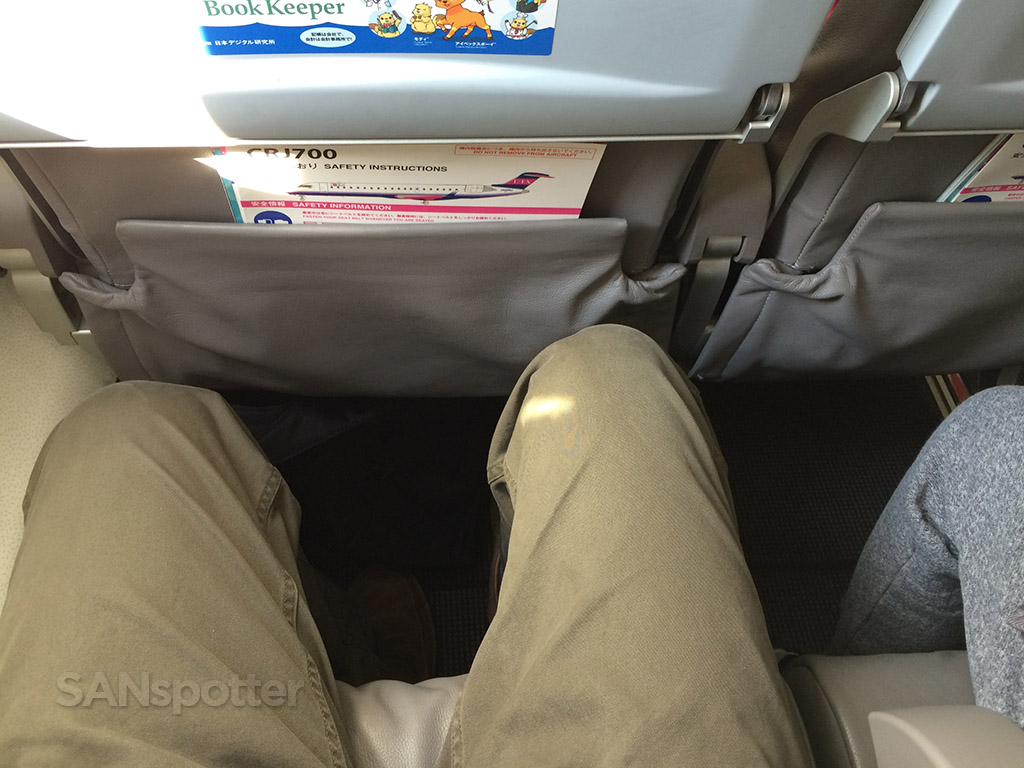 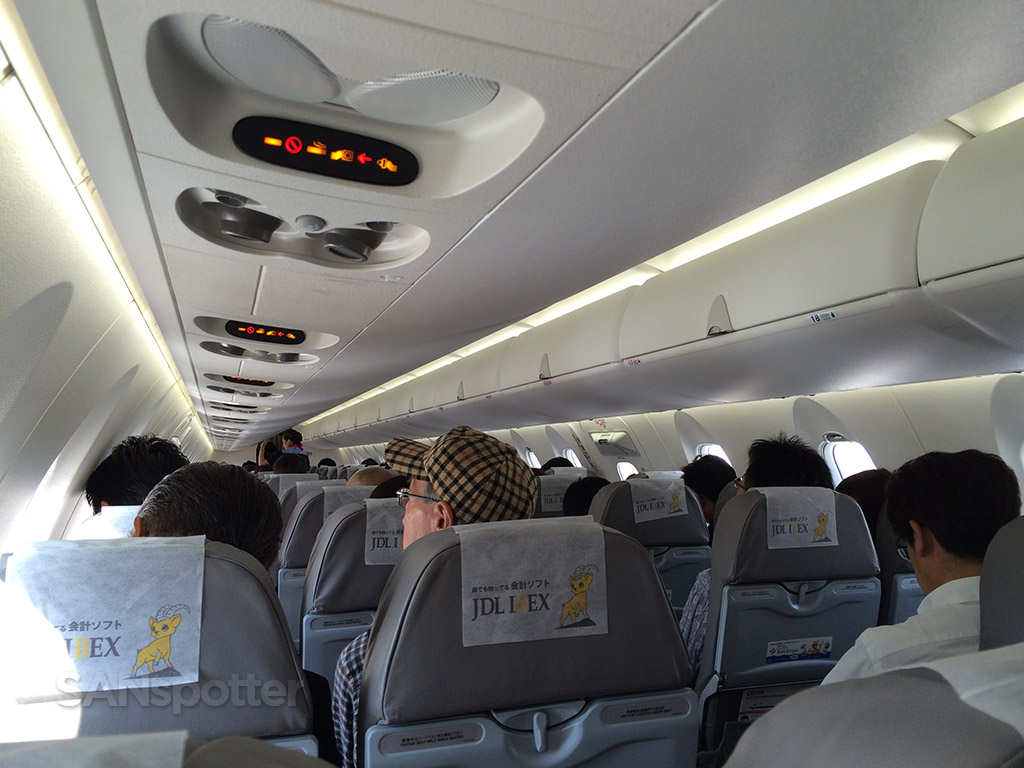 View from the back of the bus

We lifted off of runway 10 right on time, with a pretty nice view of the entire terminal building in the distance: 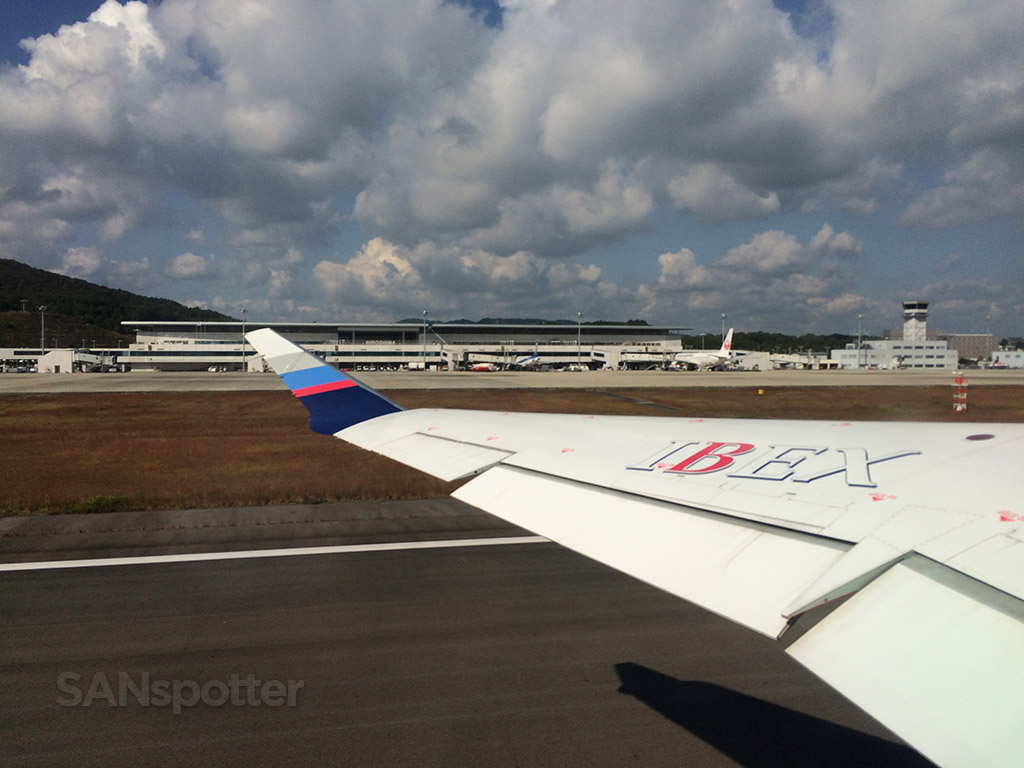 Although the climb out was a bit bumpy due to high winds in the area, things calmed down once we reached cruising altitude. At that point, I dug into the bento lunch box that my wife purchased for me right before we boarded the plane. Yes, she’s very kind and I’d probably starve without her! 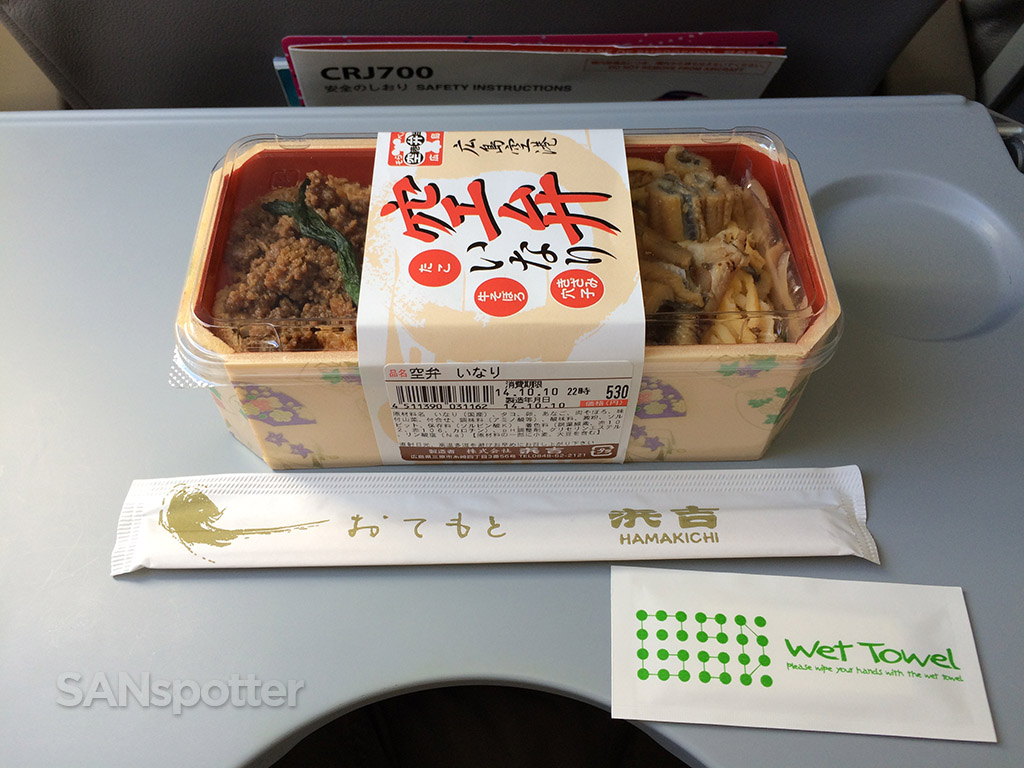 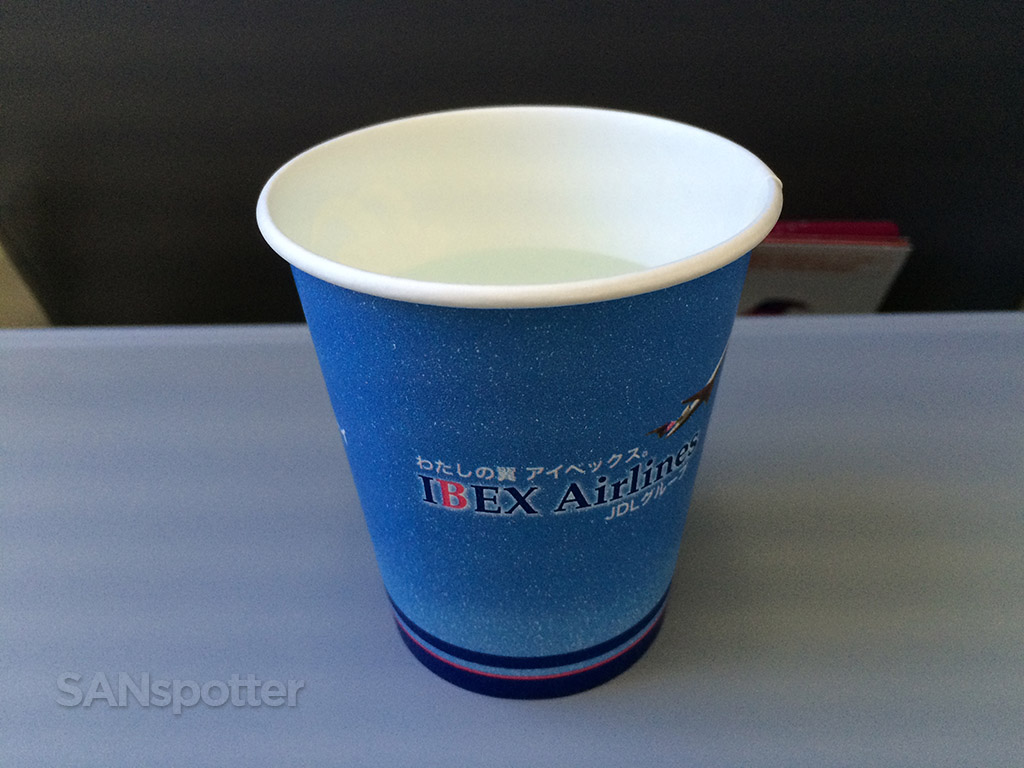 Drinks were served about 15 minutes into the flight – and we didn’t have to wait long considering that we were all the way back in the last row. 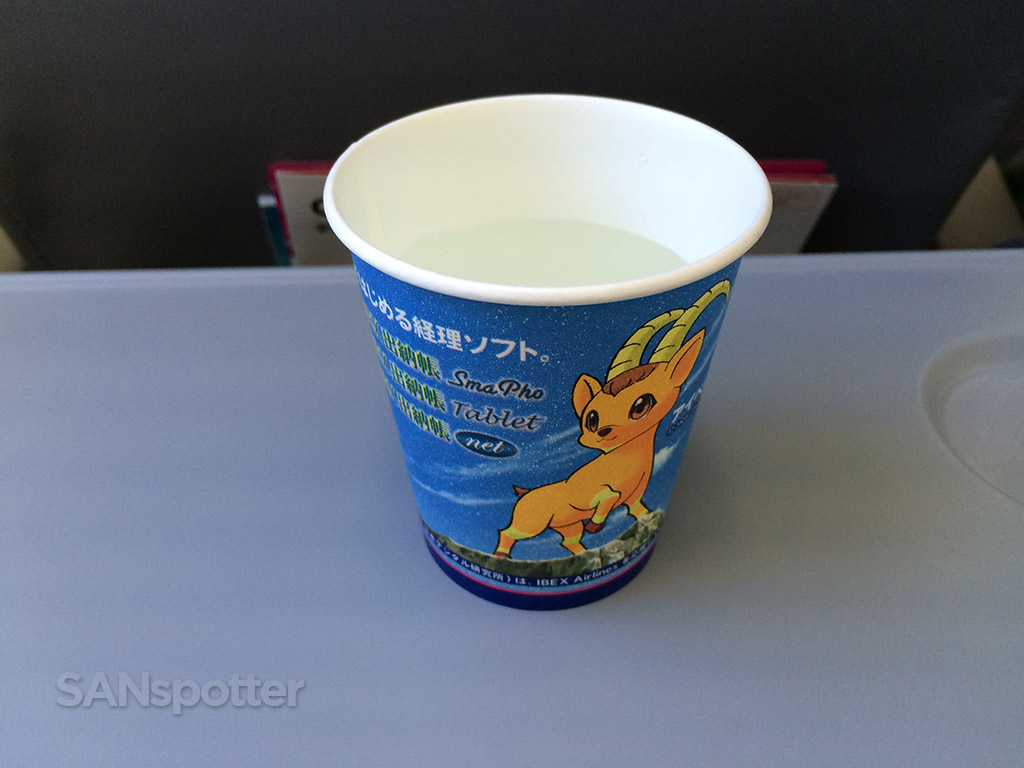 Our descent into NRT was pretty bumpy as well, with some weather off in the distance closing in fast. I do have to say it was a pretty smooth landing given the conditions – which isn’t all that uncommon here. Of all the frightening approaches I’ve experienced in my life, most of them have happened right here at NRT. The runway configuration is just not optimal for typical wind patterns, and 9 times out of 10 it’s a butt-clencher all the way in. 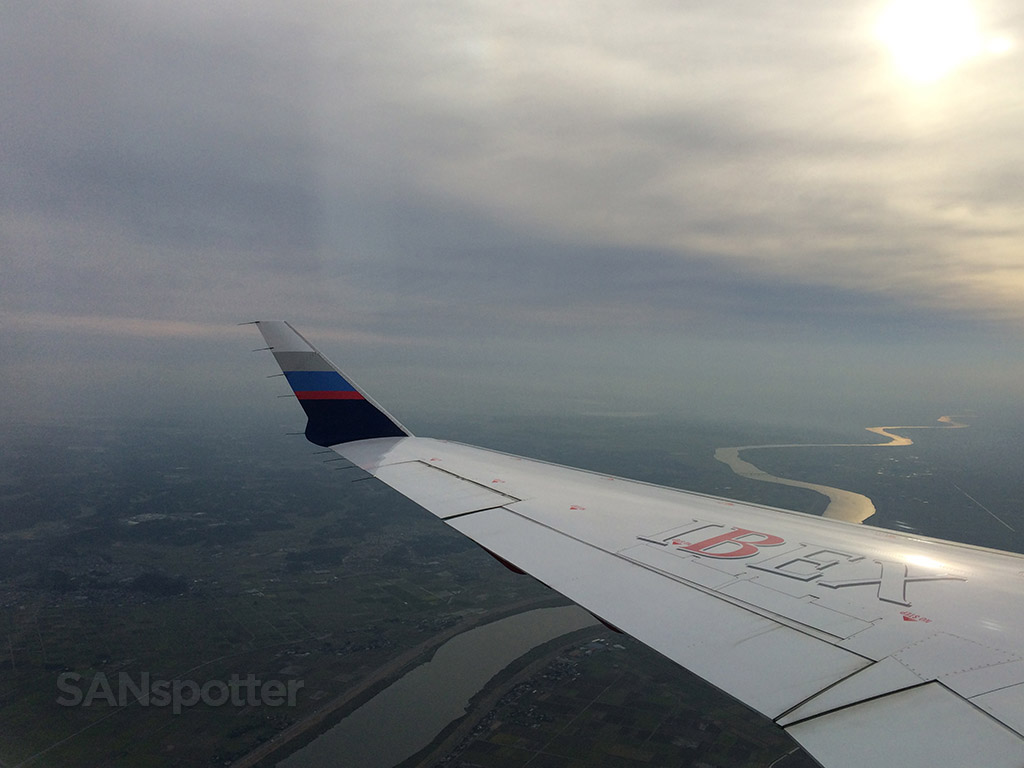 Nice mix of clouds and sun as we approach Narita 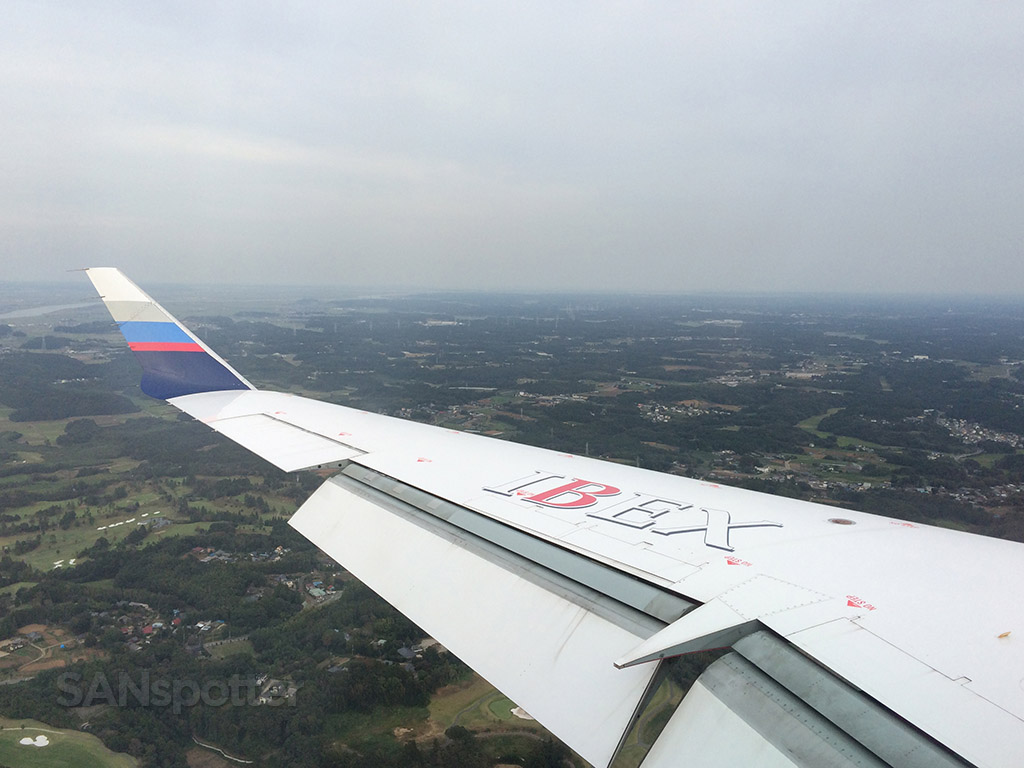 During the taxi to our remote stand, we started getting ready to get moving (fast) to get my wife her boarding pass for our connecting flight to LAX. We had no idea why they wouldn’t check her in for that flight at HIJ, but we were soon to find out… 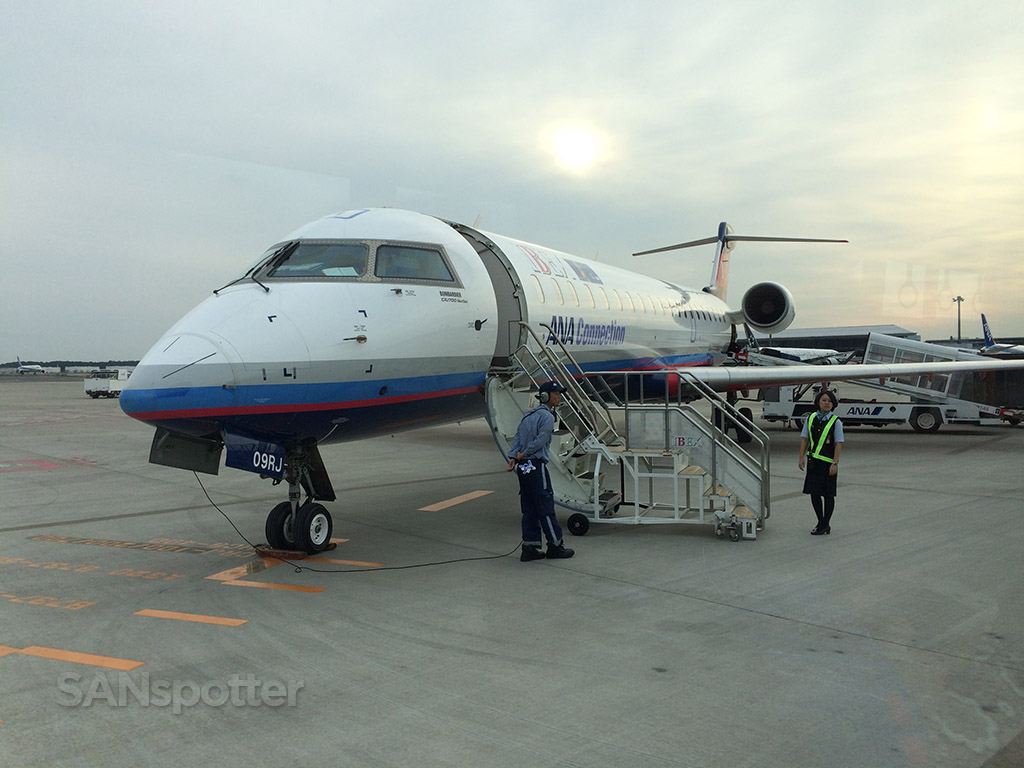