Now that I knew what to expect from Virgin America (good things), I was looking forward to another great flight as we made our way to SFO that morning. The taxi driver dropped us off right outside terminal 2, and from there we proceeded to the Virgin America check in counter without having to wait in line at all. 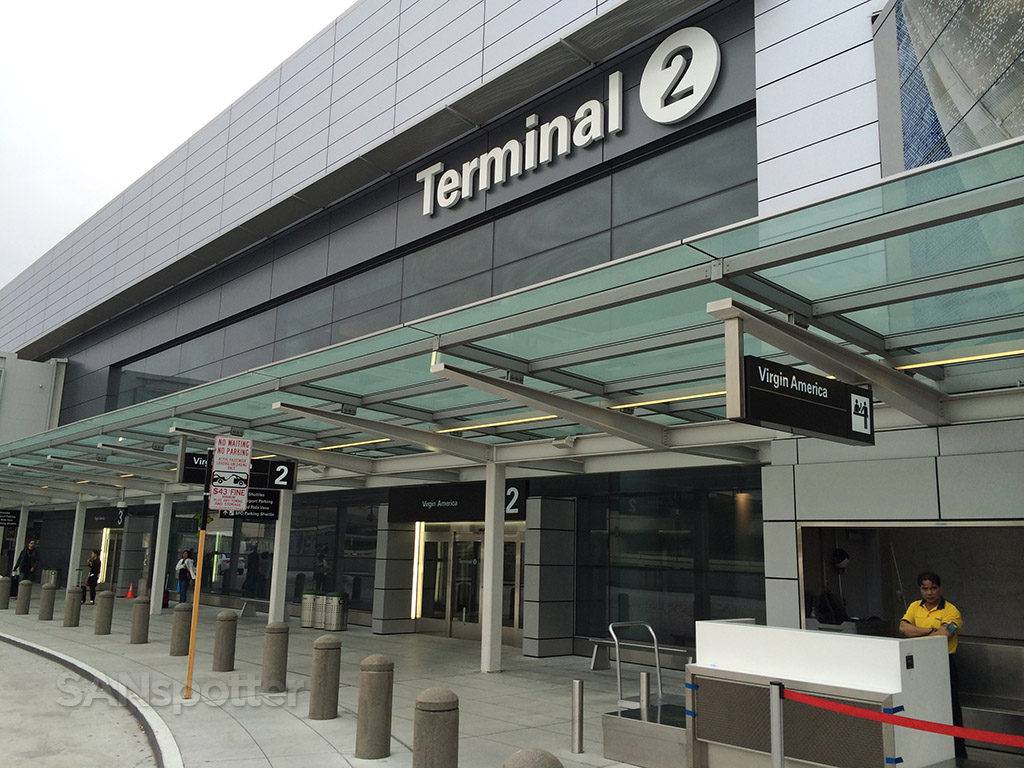 Outside terminal 2 at SFO 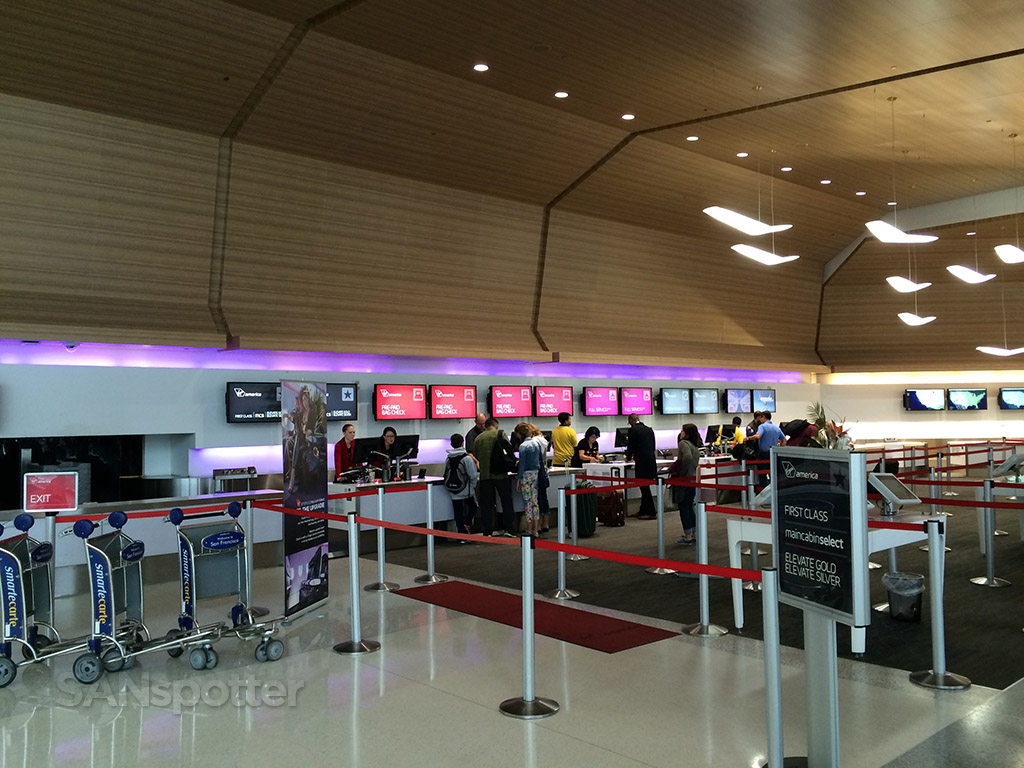 Things weren’t so busy on this Sunday morning, and we were checked in and through security within a matter of minutes. 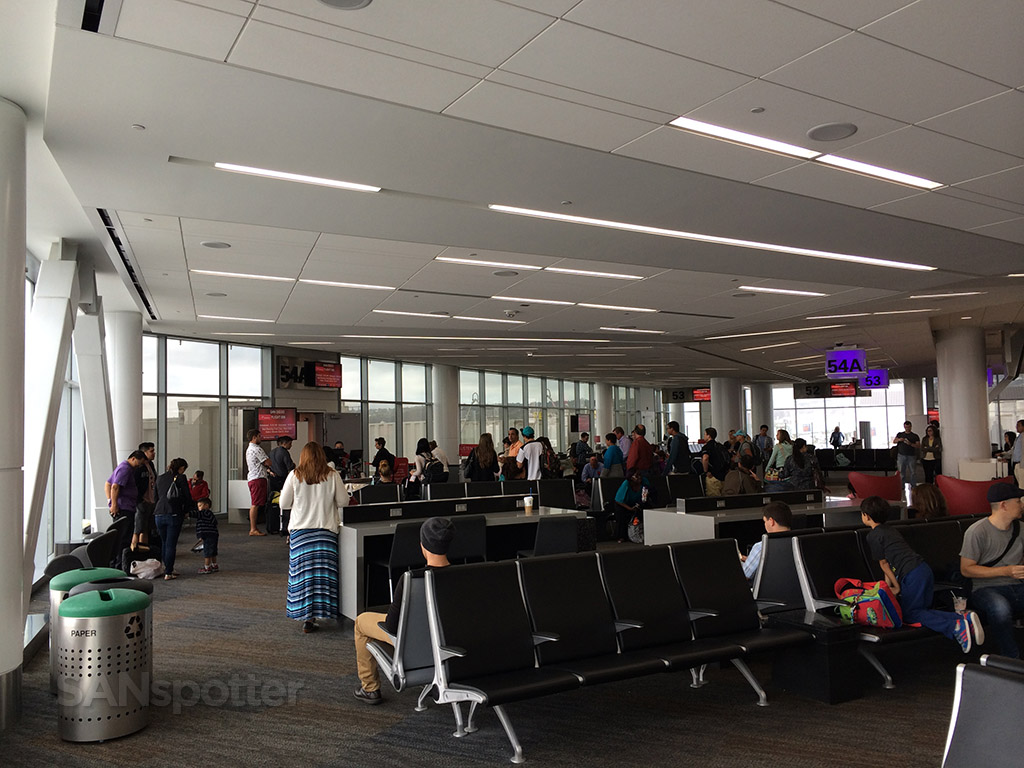 Our flight was departing out of gate 54A in terminal 2 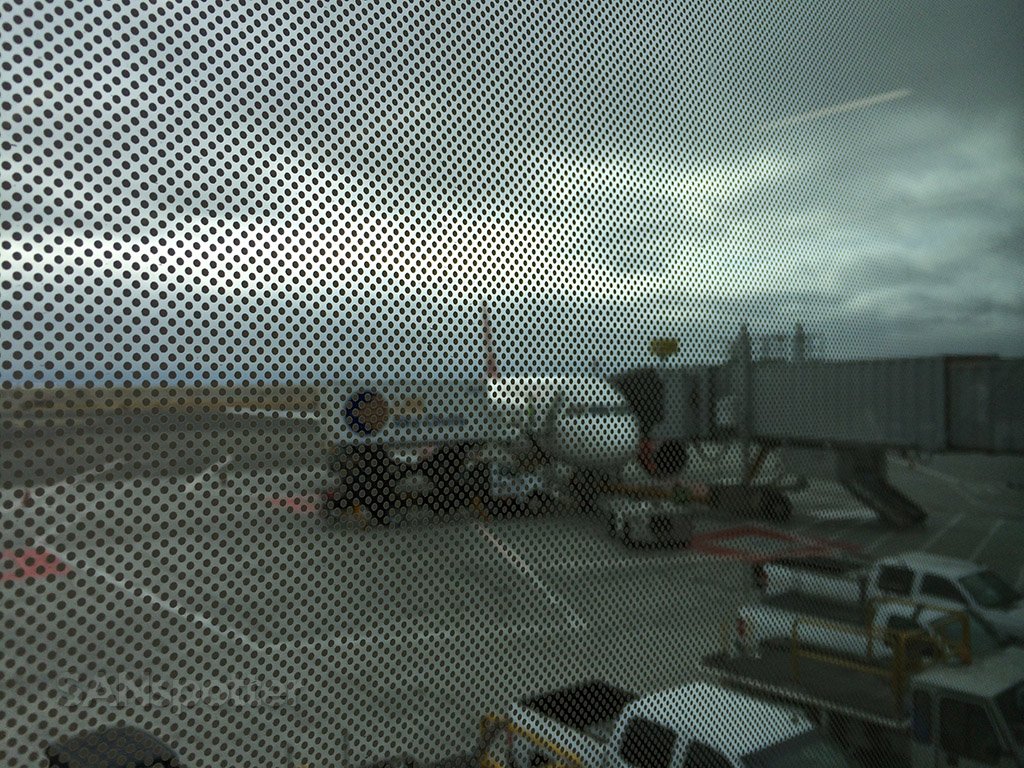 A decent view of our aircraft was ruined by that dreaded dot-pattern tint on the terminal windows. I hate that stuff!

Boarding had already started by the time we arrived at the gate (we were busy browsing the shops), and we ended up being one of the last 1/3 of the passengers onboard.

Unlike our outbound flight two days ago, we had seats in the second row of first class – and I immediately noticed how much more legroom this row had compared to the bulkhead row. There was plenty of room to stretch out, and I can easily say that I preferred sitting here instead of at the bulkhead. 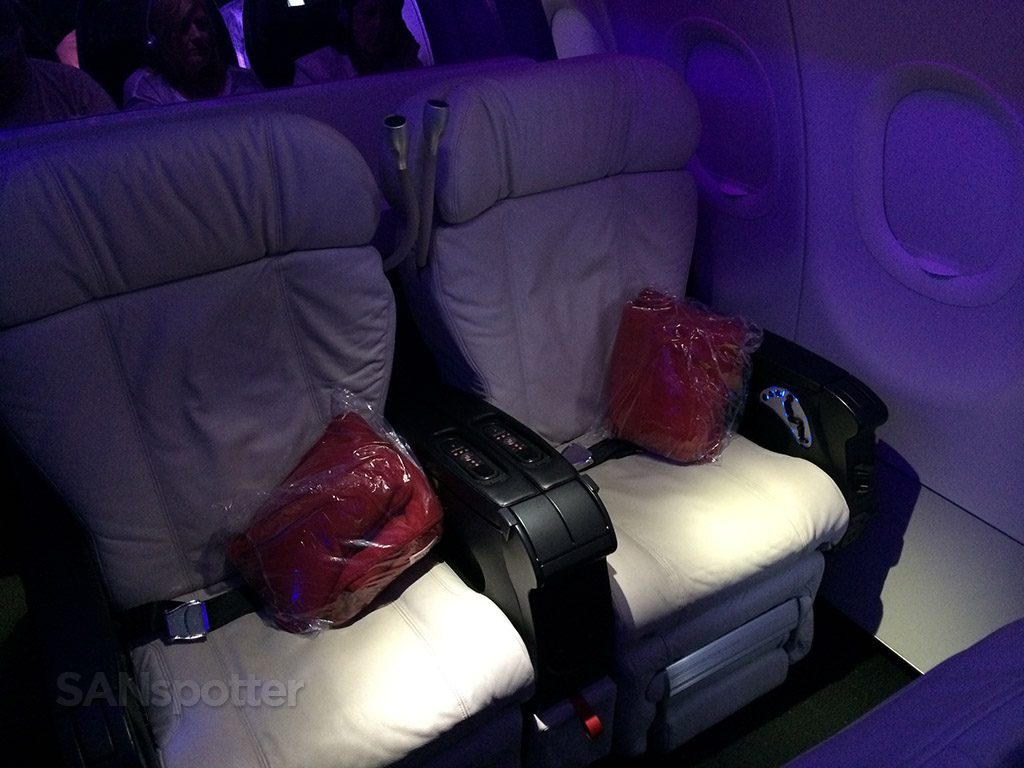 First class seats 2A and 2B on this Virgin America A319 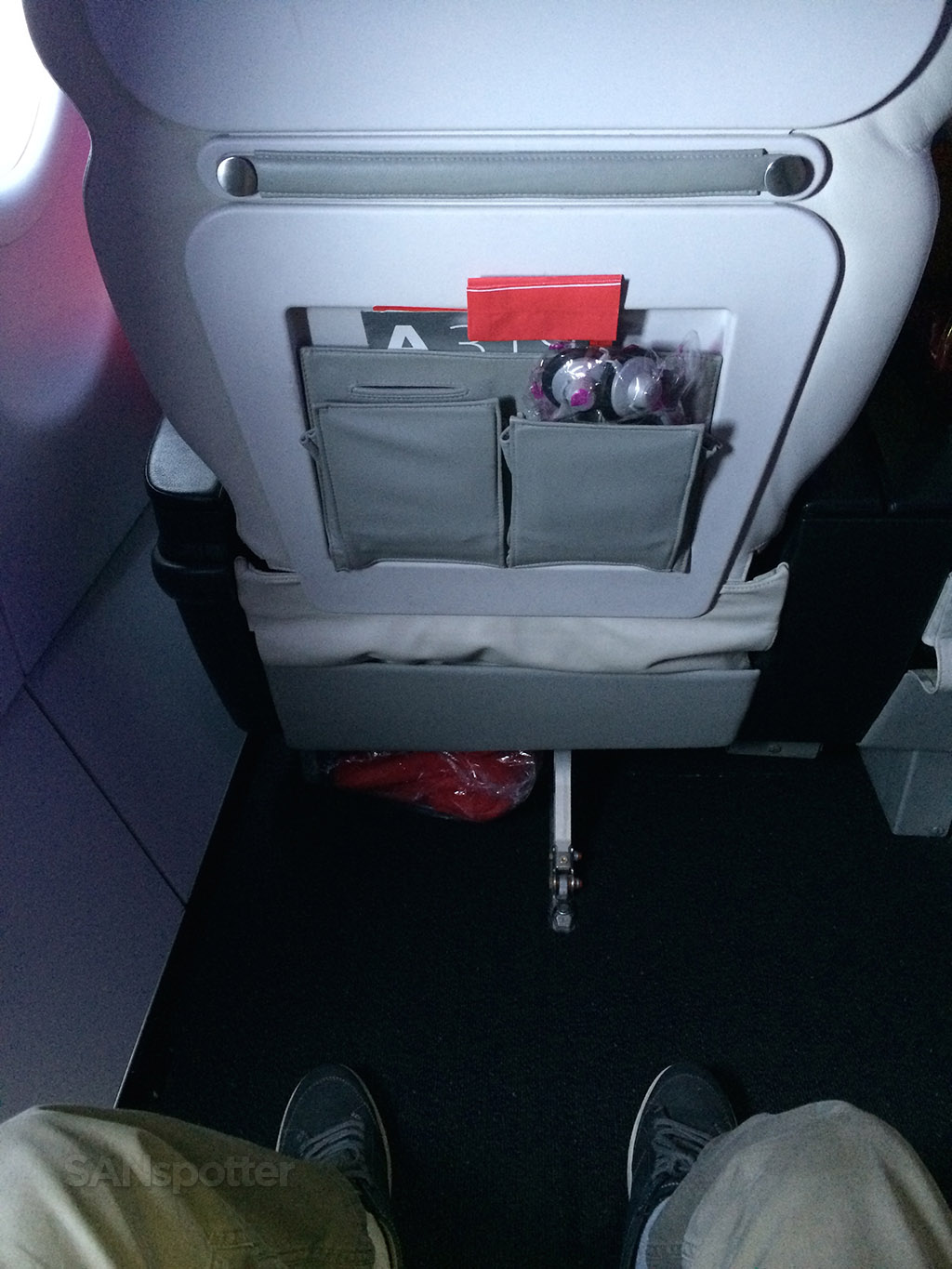 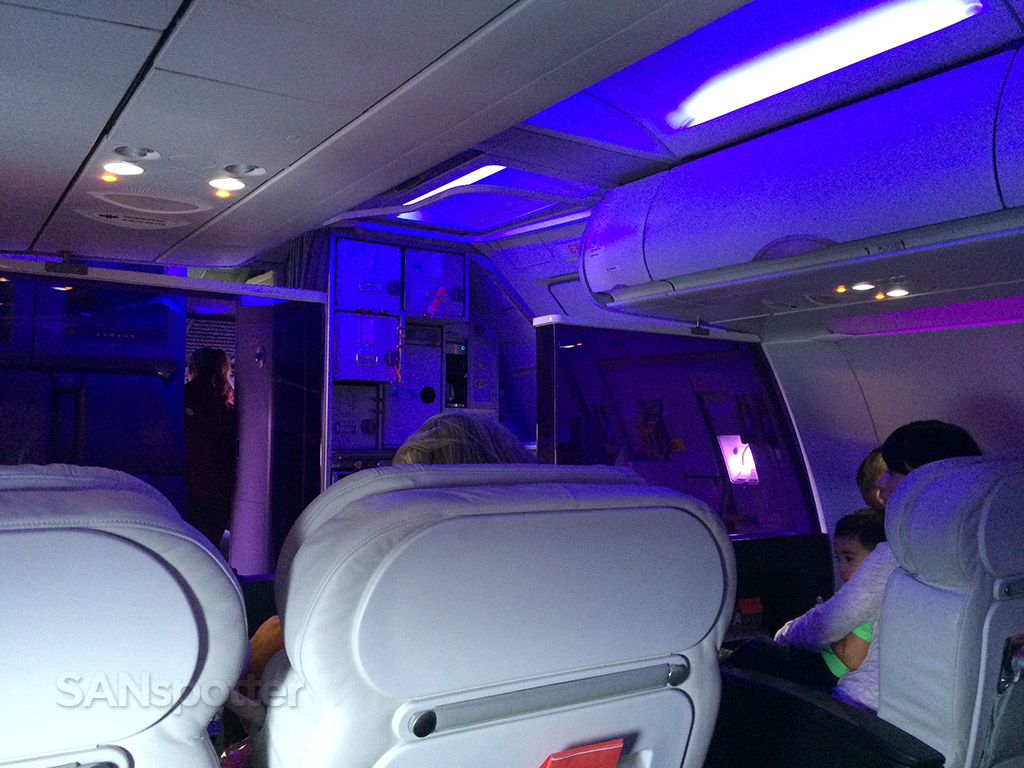 As we were getting situated, the flight attendants began thier safety demonstration. The economy class flight attendant made this highly entertaining by lip synching and performing the high-energy Virgin America dance-based demonstration video live – running up and down the aisle and performing the dance superbly. Suffice to say, he received a healthy round of applause after that performance! 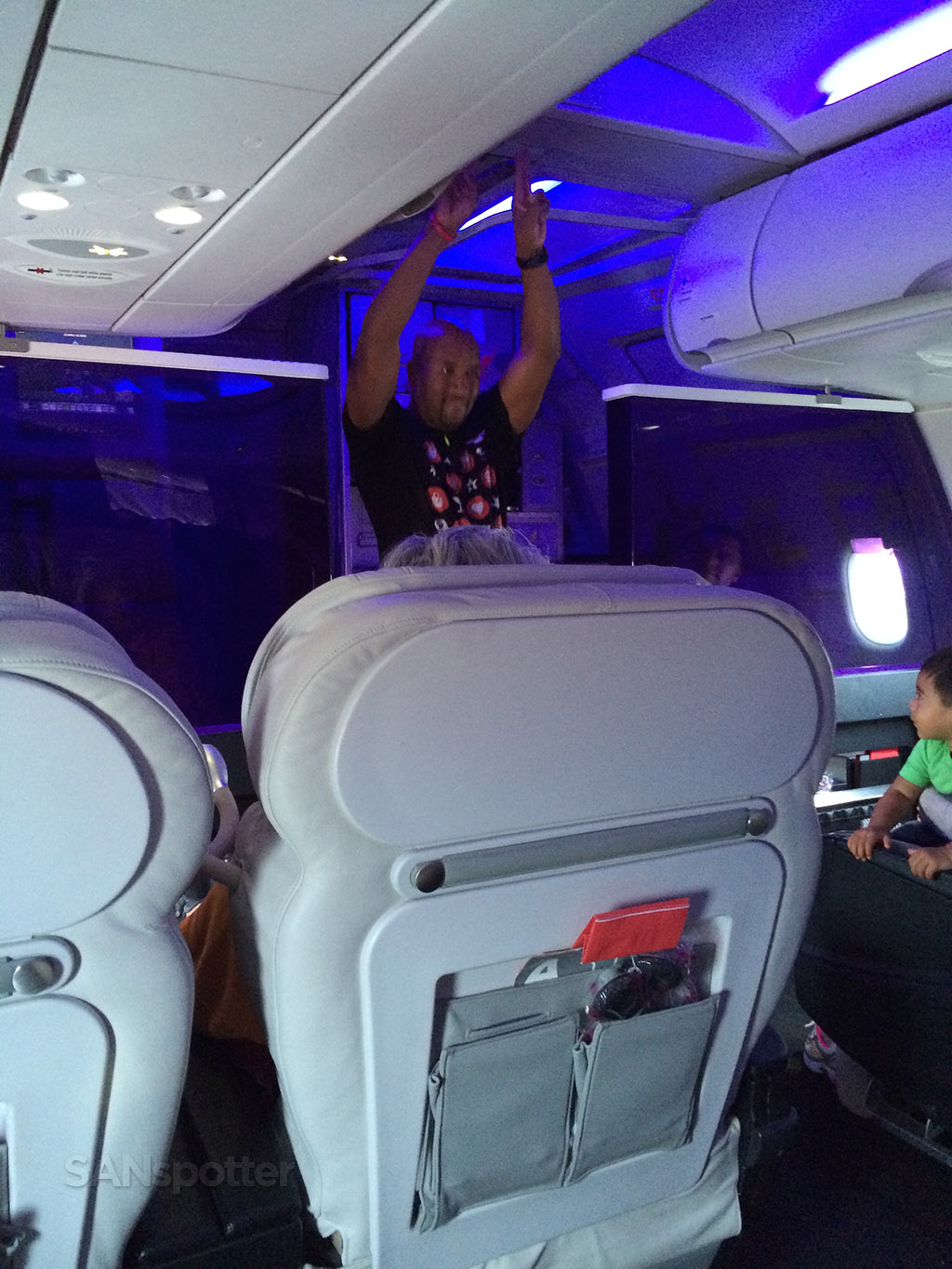 One heck of a good performance by the flight attendant!

After a fun-filled weekend in San Francisco, I was pretty tired this morning. Therefore, after taking a handful of pics of our departure from runway 28L, I immediately shut the window shade, put the seat in the “relax” position, and then proceeded to do just that for the remainder of the short one hour and fifteen minute flight down to San Diego. I did try working on this trip report for a bit, but that didn’t last long…I was really tired! 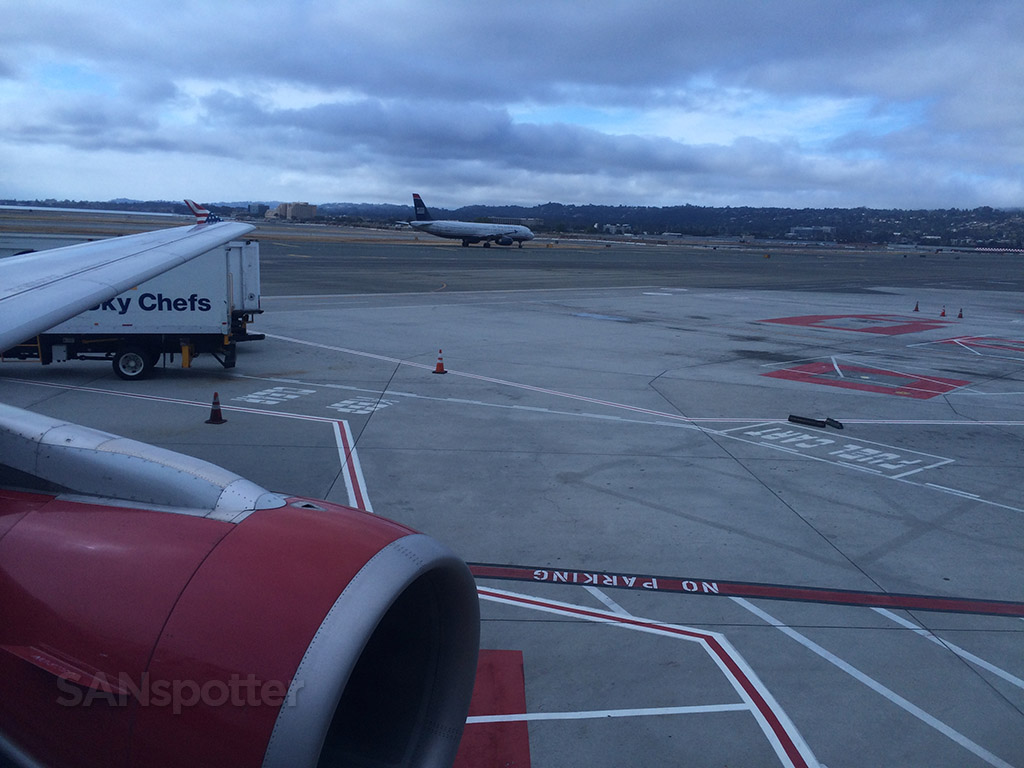 Pushing back out of the gate at SFO 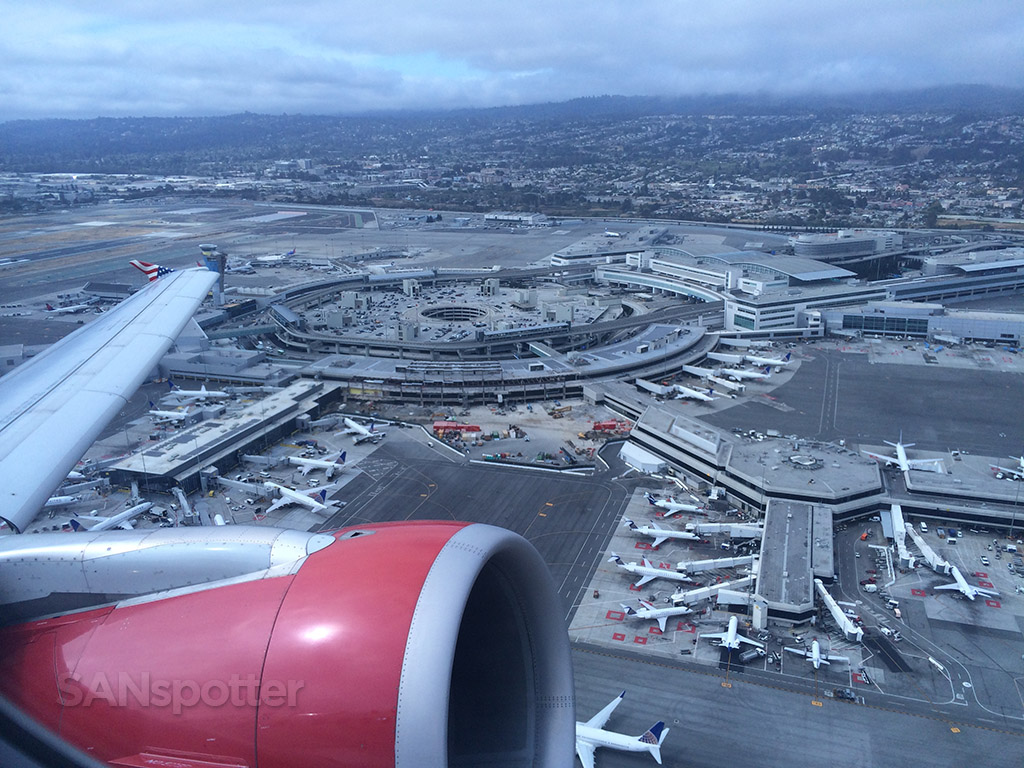 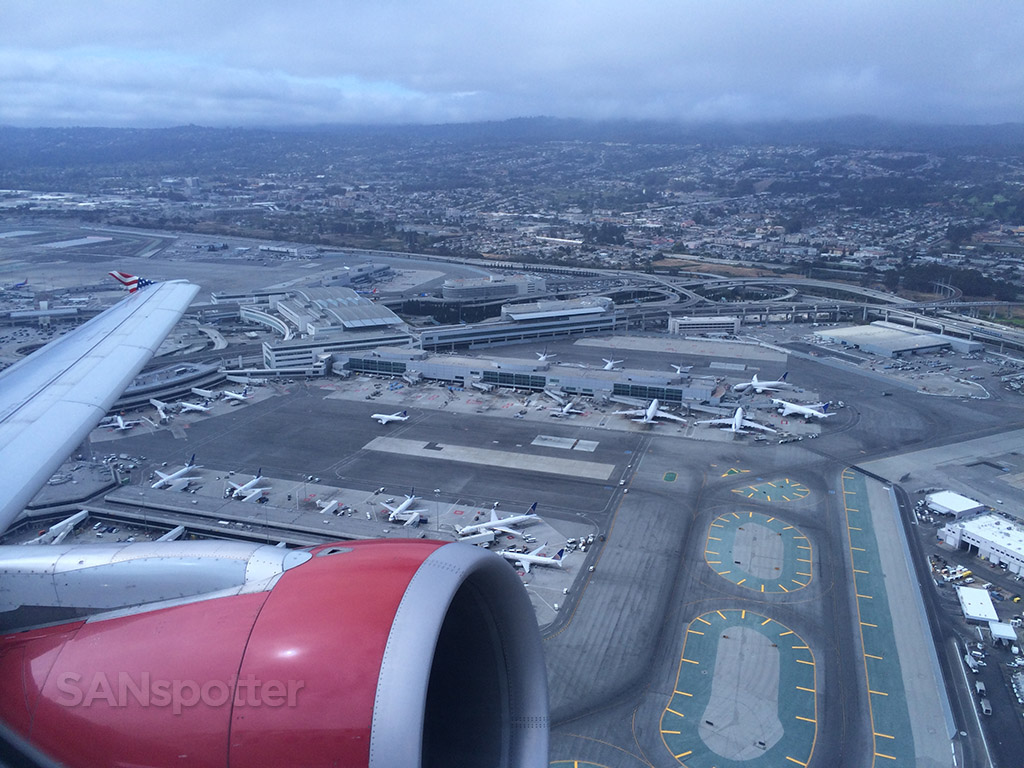 As always, there was a lot of good stuff parked at the International terminal 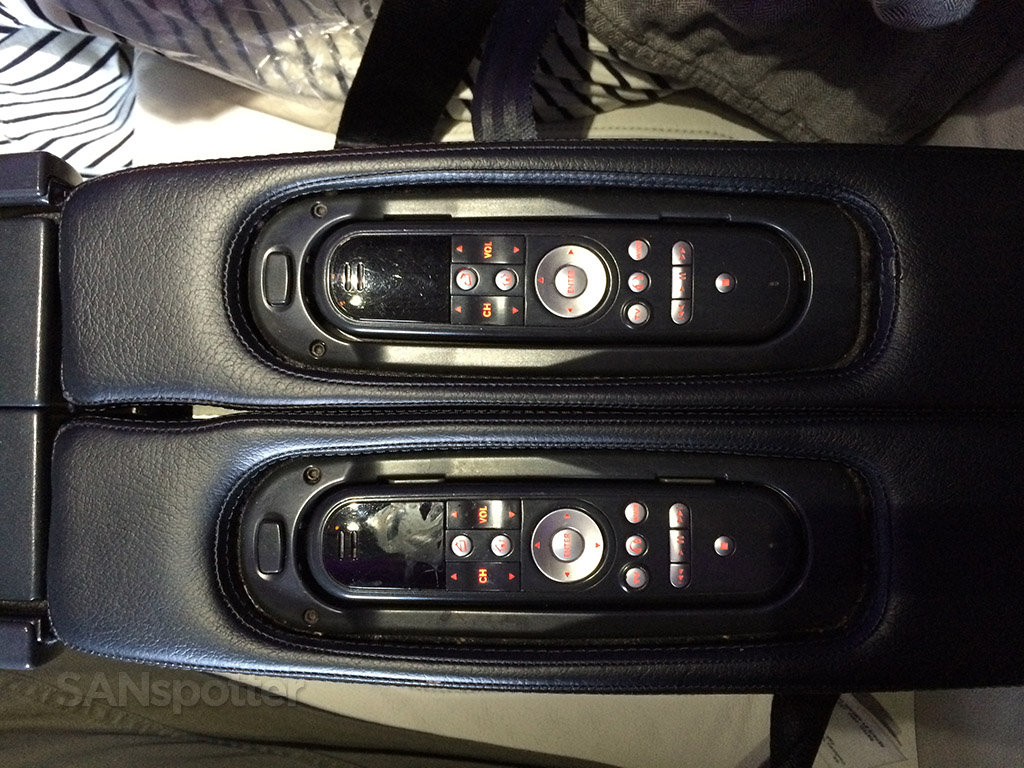 There’s a lot of good in flight entertainment on these VX A319’s, but I was too tired to play with any of it. 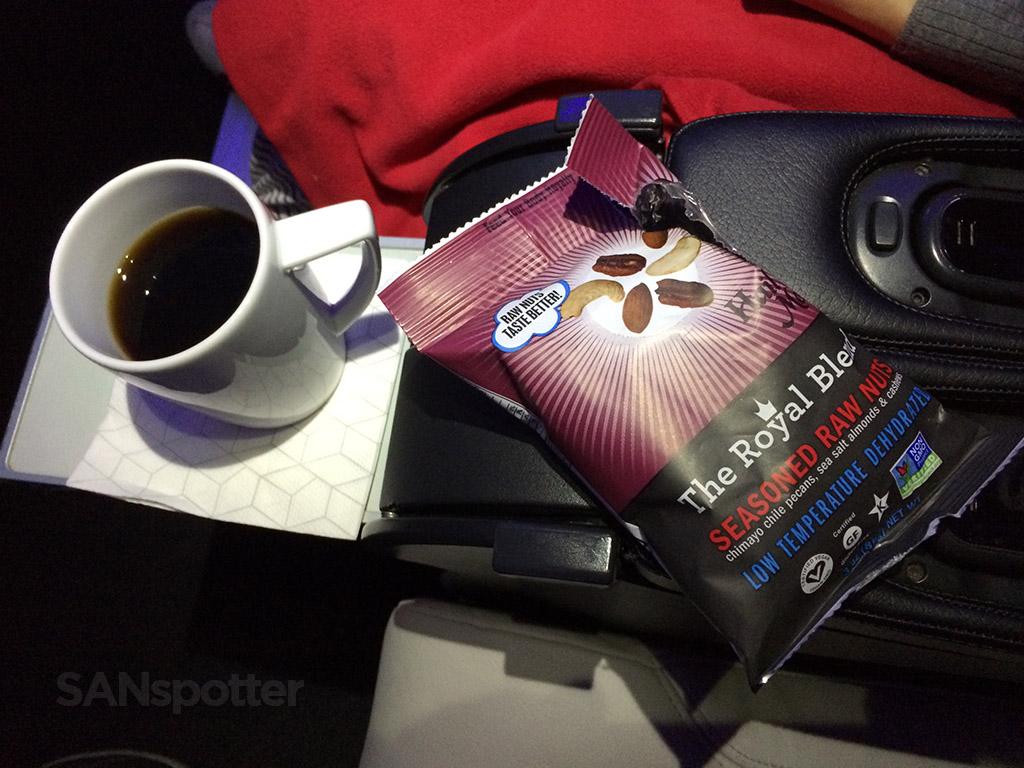 For the in-flight snack, I nibbled on a bag of nuts while my wife enjoyed some coffee.

The arrival into San Diego was completely uneventful other than the fact that it was cloudy and very humid once we arrived. It had obviously been raining earlier, which is pretty rare for mid-summer in southern California. No matter – it was good to be home. 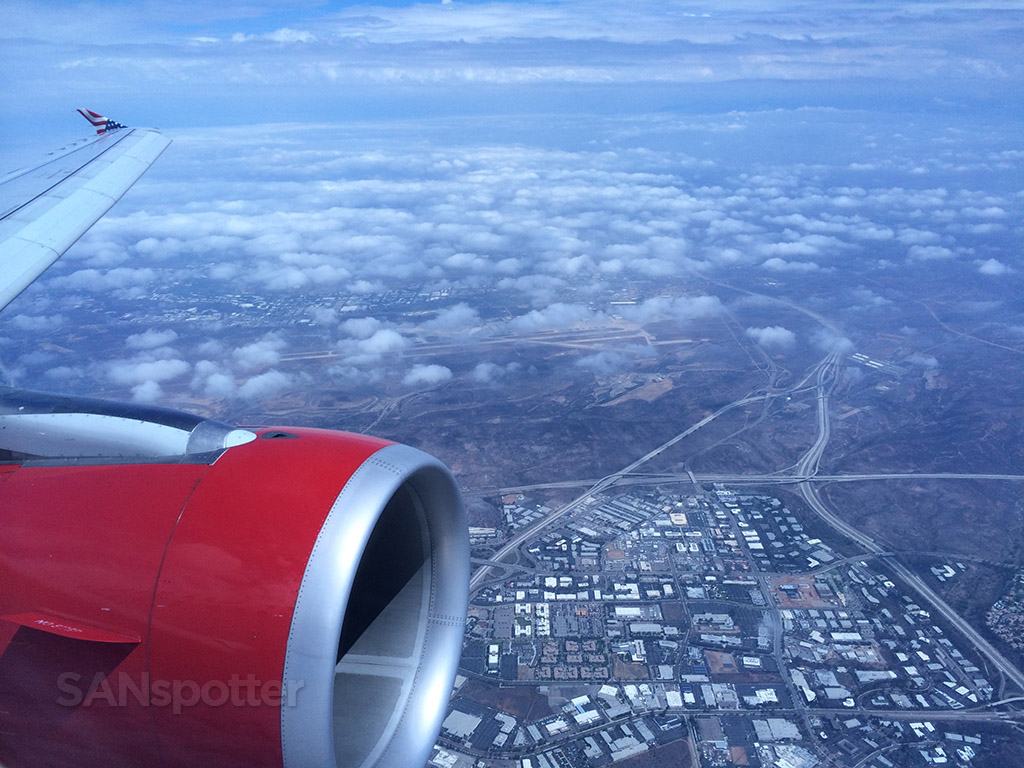 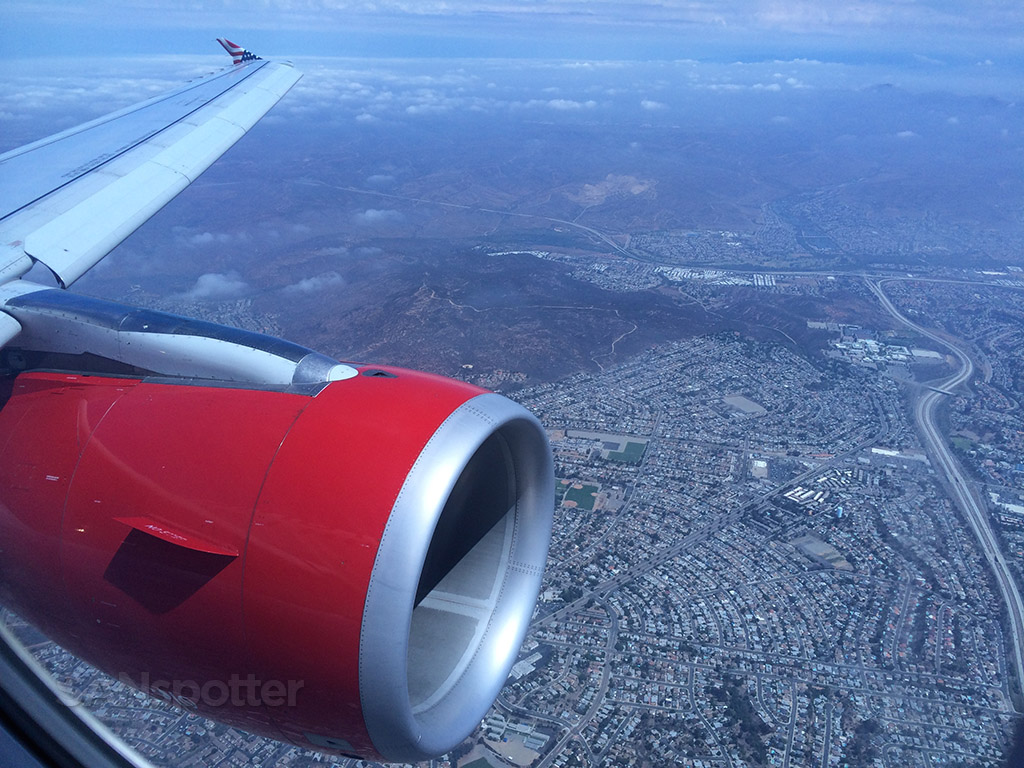 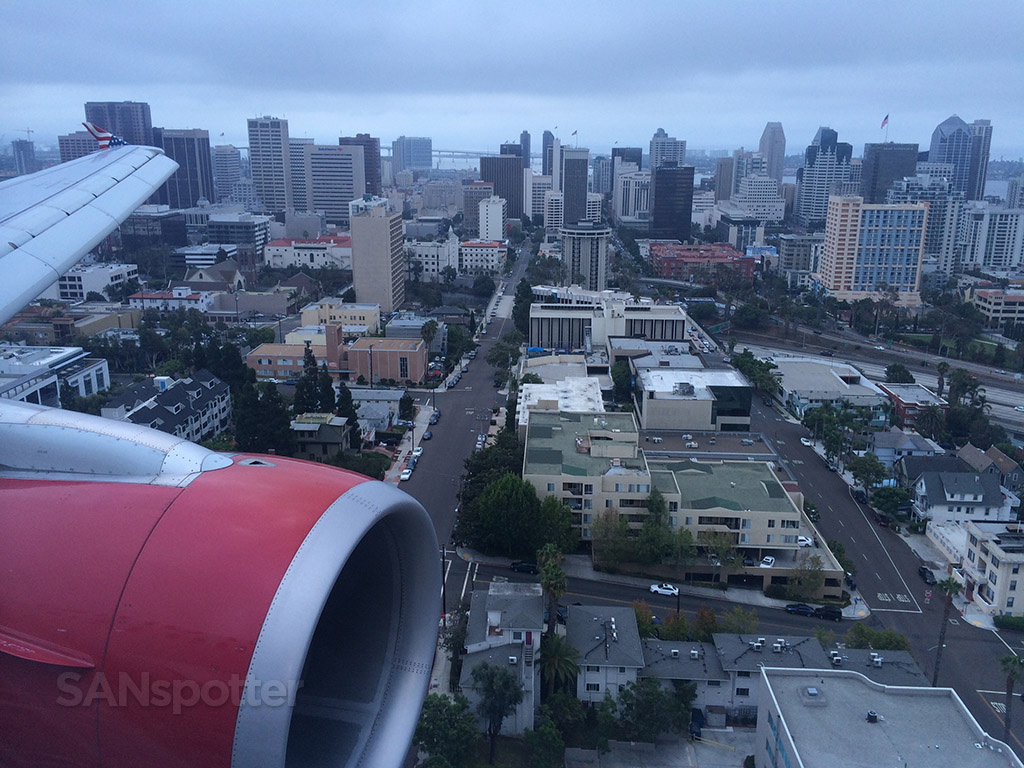