As far as connections go, this one couldn’t have been any better. It was quick and easy, and I literally went from one plane to another (with a quick bathroom break on the way). No lines, no excessive walking, and no waiting. Woo hoo! 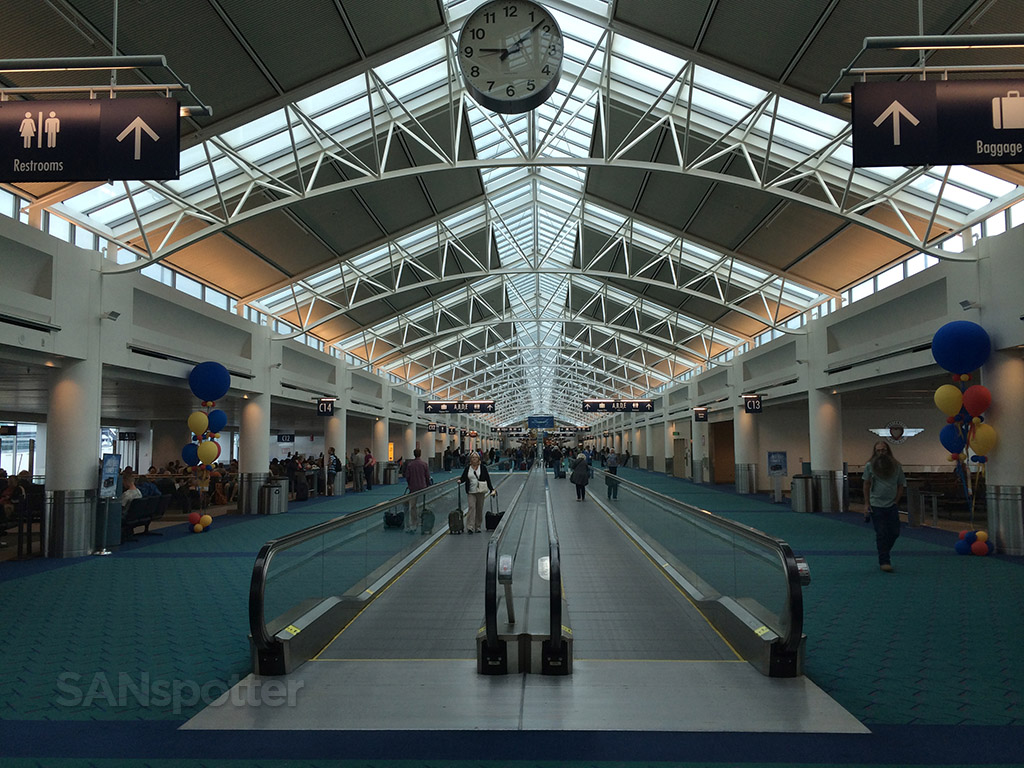 Inside concourse C at PDX

The flight up to ANC was departing out of gate C4, and boarding was already underway once I arrived. 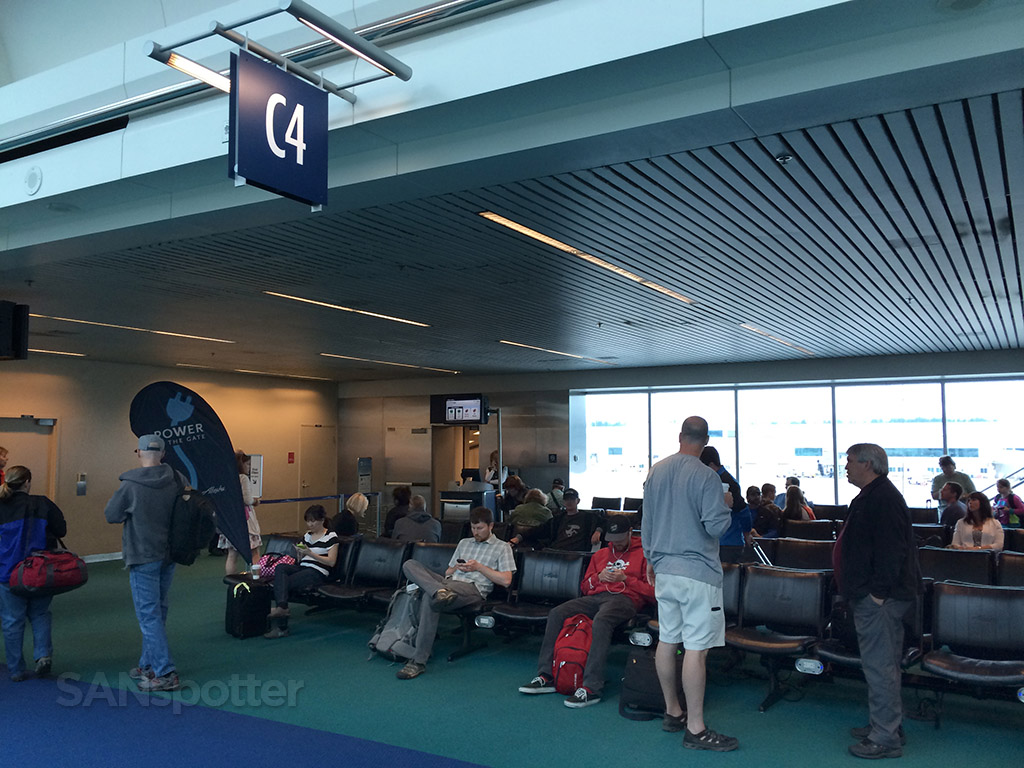 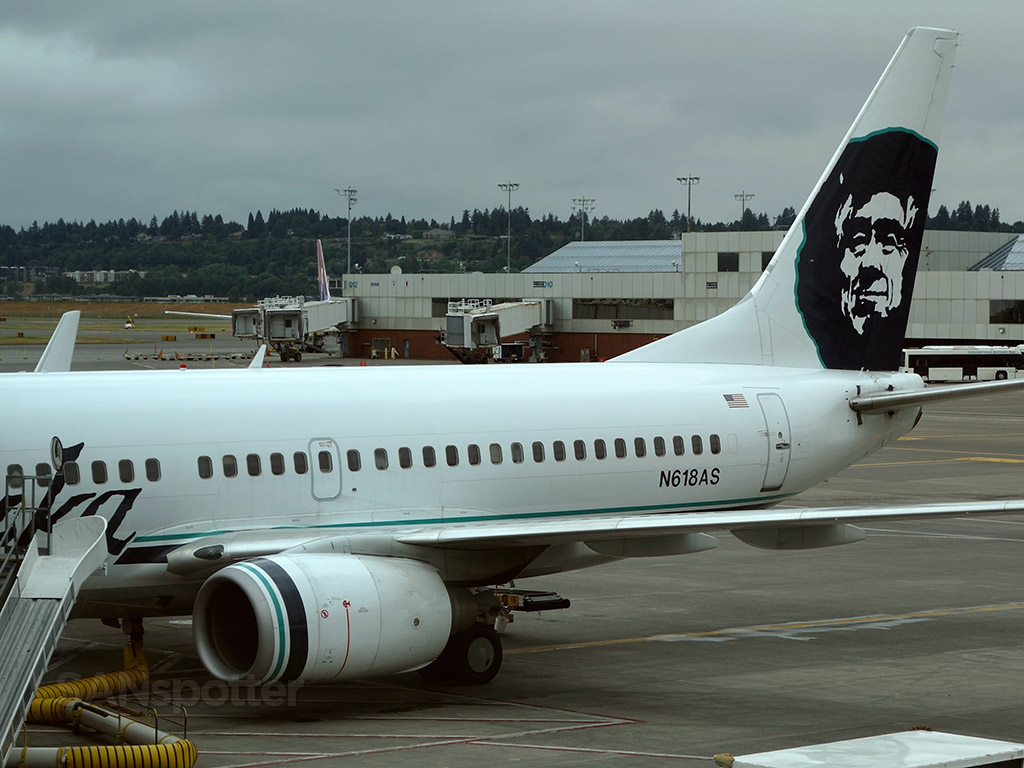 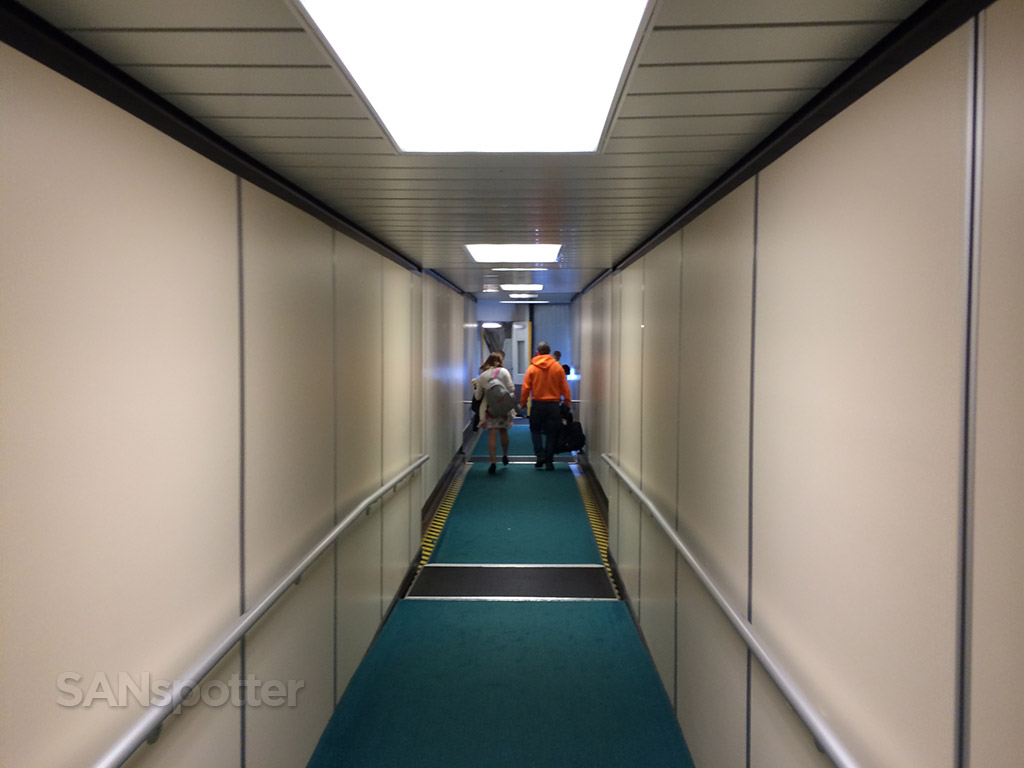 Walking down the jetway to board AS 131 to ANC

I had seat 3A once again, but this time it was on a 737-700. And once again, this was a last-minute equipment swap. This flight was scheduled to be be a 737-400, which I admit I was looking forward to due to the fact that those are the next to be retired from the Alaska fleet. But just like the -400, this -700 was equipped with 3 rows of first class seats – one less row than the -800 I just came off of. 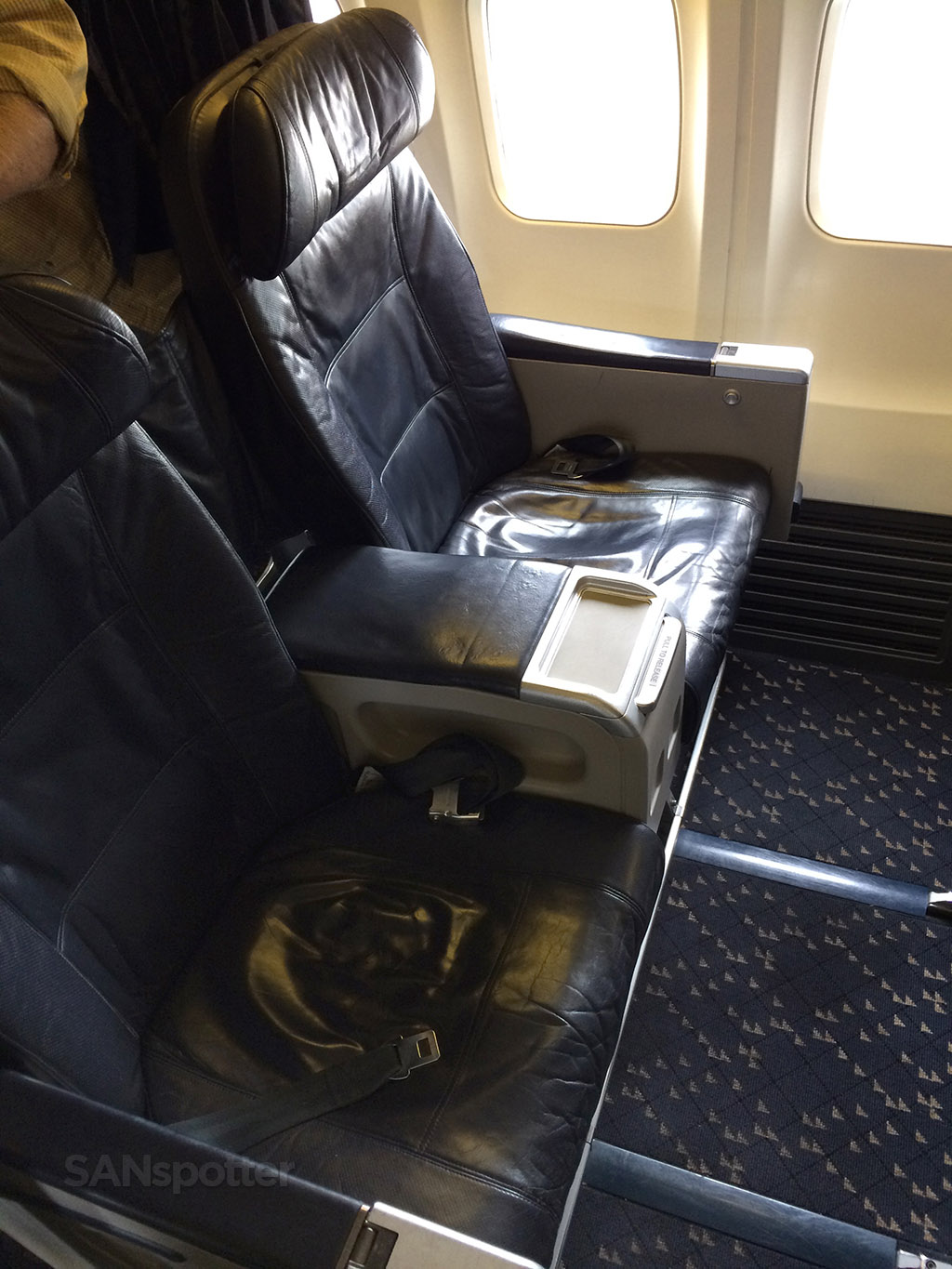 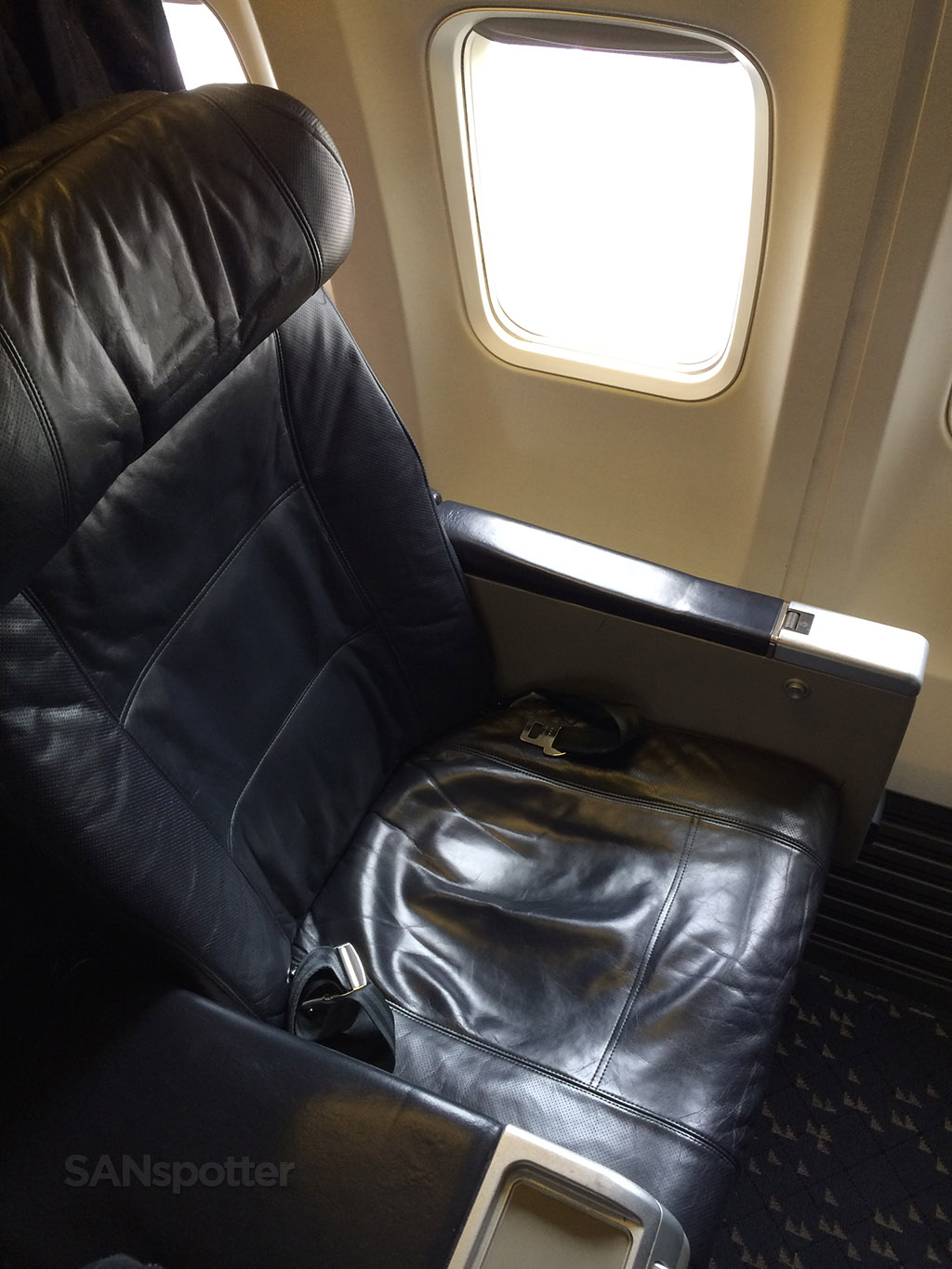 A closer look at seat 3A (my seat for this flight)

My first impression upon sitting down was how run-down this aircraft was. Seriously – the first class cabin looked old and worn out with scratched surfaces, and nearly-ripped seats. This plane had put some miles behind her, that’s for sure. 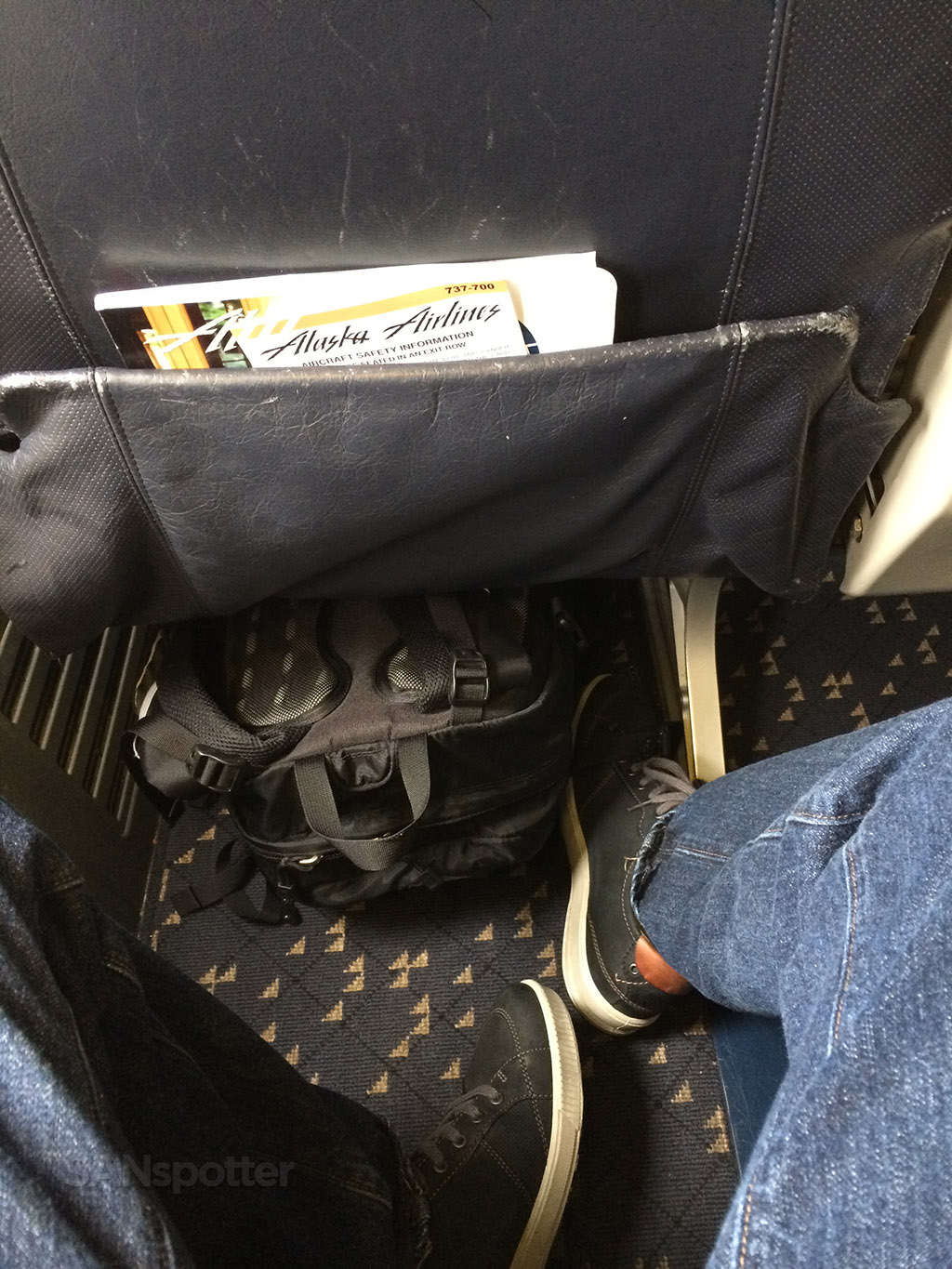 Leg room in first class on the Alaska Airlines 737-700 – with seats in terrible condition.

First class was full (as expected), and a 16-person wedding party group boarded right before the doors closed. Of course they would be sitting in the first few rows of economy, so let’s just say that I wasn’t expecting any peace and quiet on this flight. It wasn’t obnoxious, but all the talking and laughing was distracting even before we pushed back from the gate. 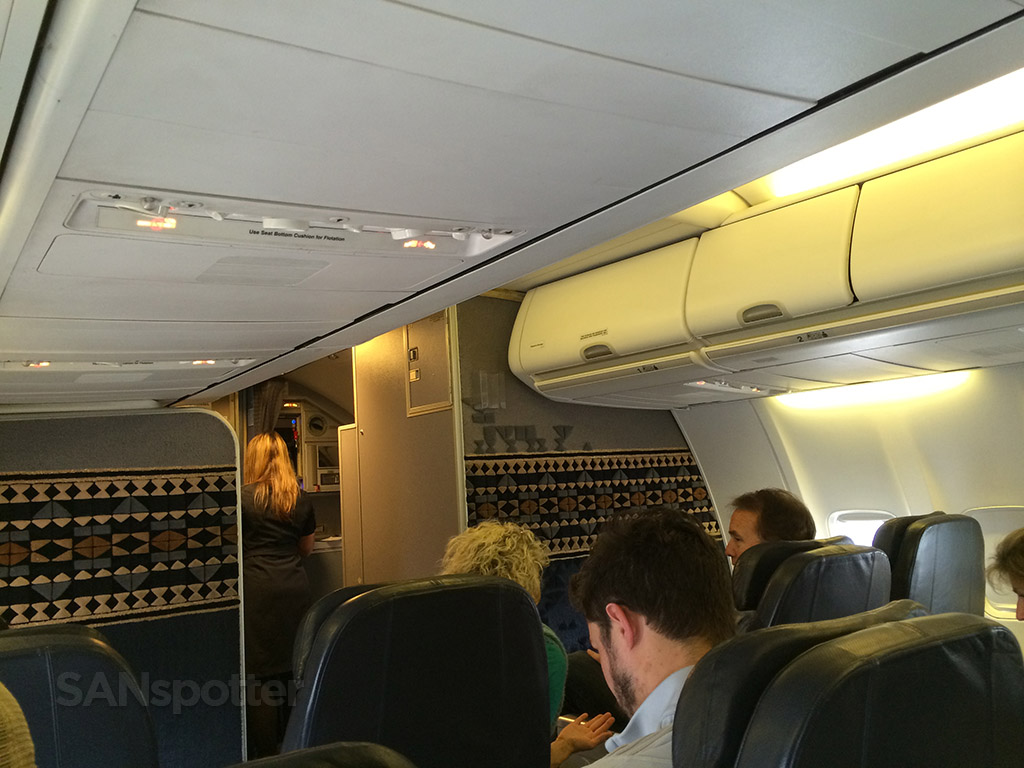 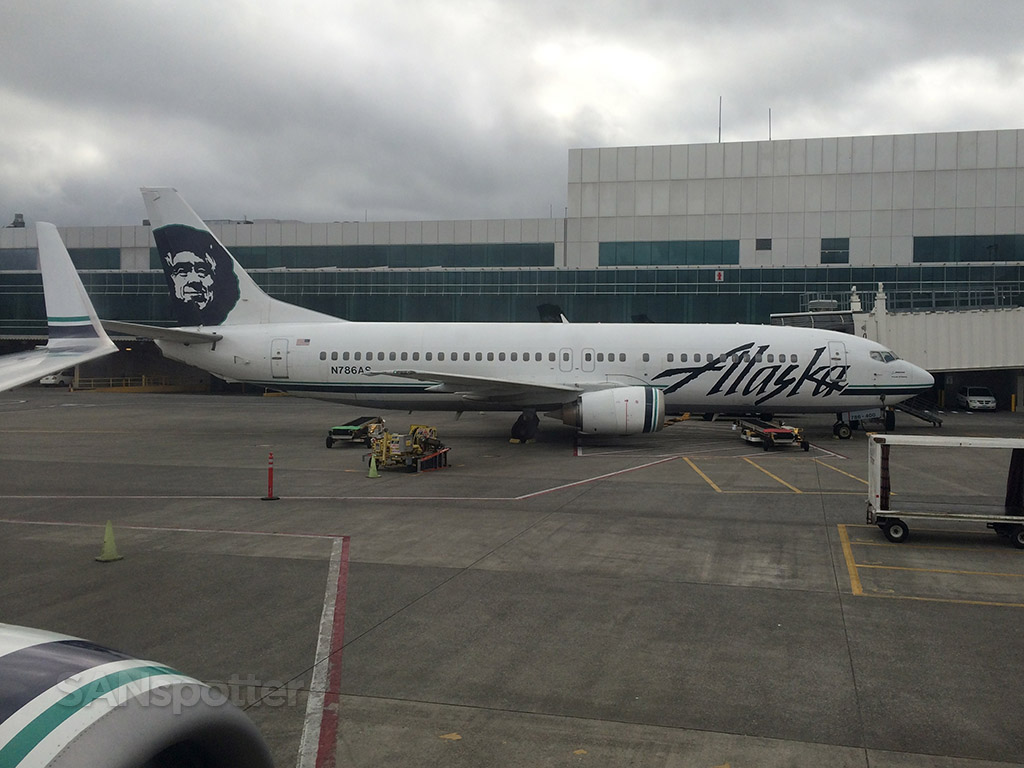 The view out the window right before we pushed back. PDX is AS country!

We departed gloomy Portland right on schedule, and sorry – I didn’t take pics of the departure for three reasons: first, it was a really dull and gray day so there wasn’t much to look at. Second, there was a huge condensation spot right in the center of my window. And third, the teen kid sitting next to me in 3B was glued to the window as well so I felt a bit awkward taking pics. Trust me – there wasn’t much to see anyway. 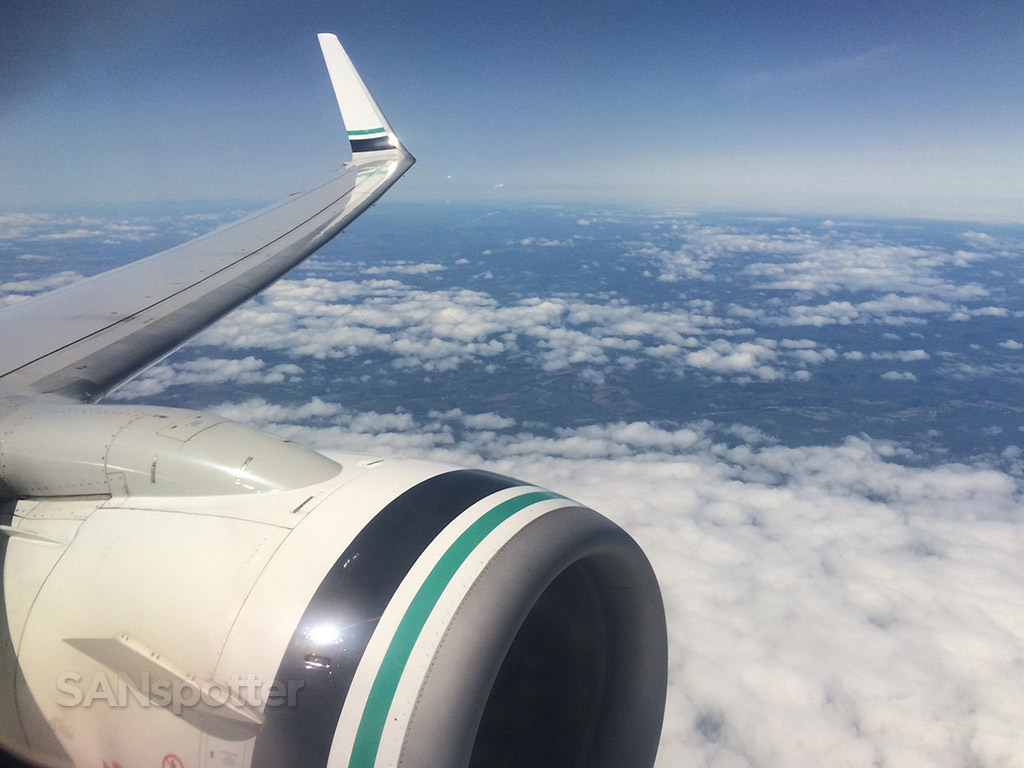 The beverage service began within 10 minutes of departure, and not once was I addressed by name. That’s not a big deal to me or anything, but I just noticed it as an inconsistency from the last flight. And somehow, that group of 16 got the pilot to mention them in his welcome announcement as soon as we leveled off. 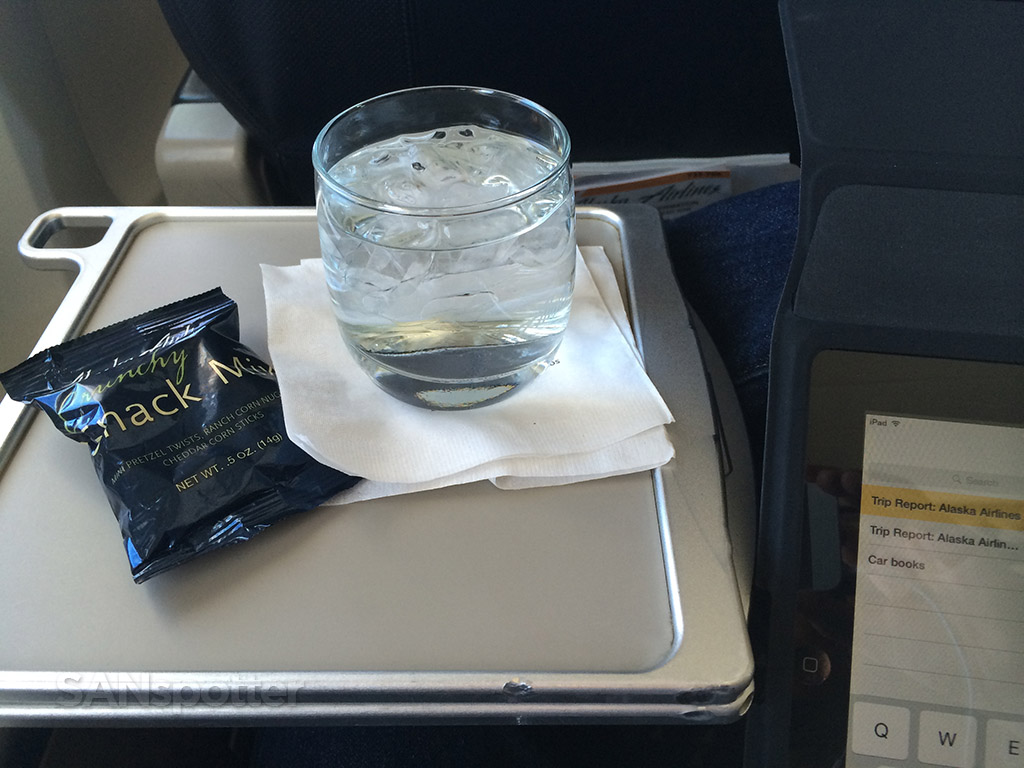 Lunch was chicken with penne pasta in some sort of tomato-based sauce, and I couldn’t help but to be reminded of cafeteria food as I ate it. It wasn’t terrible, but the pictures of Alaska Airlines first class food I’ve seen in other trip reports must have somehow elevated my expectations a wee bit unrealistically. It was certainly good enough as a mid-day meal, but nothing I would pay more than $5 for. 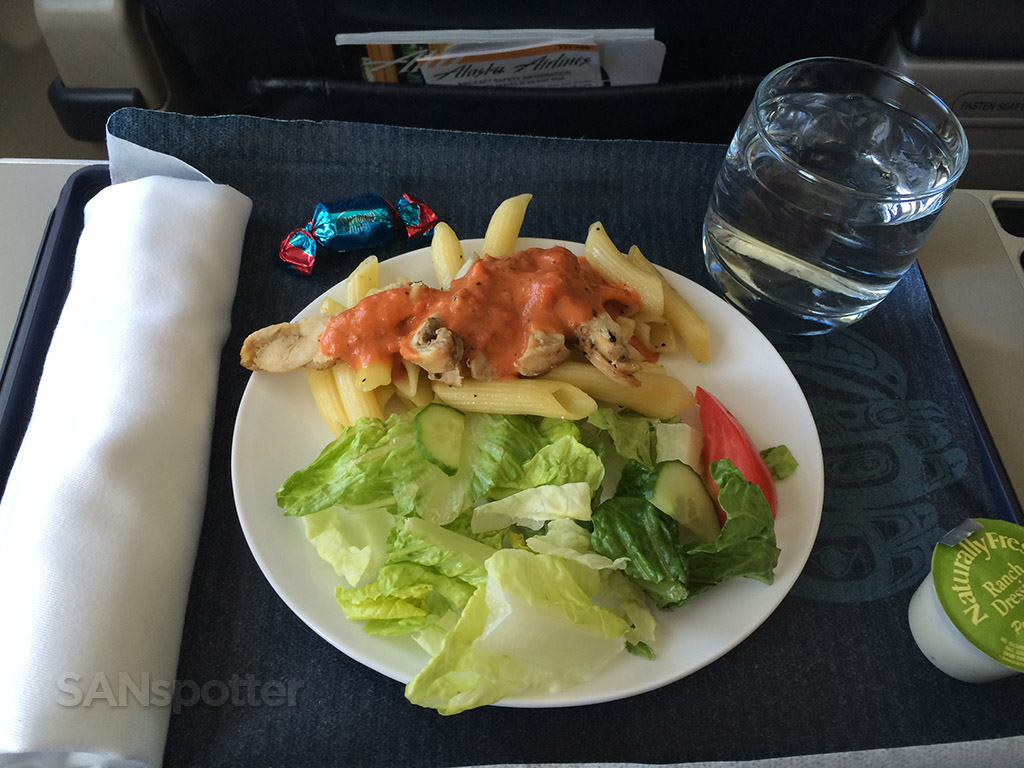 I spent the rest of the flight trying to nap as best as I could, but it was difficult with all the conversation going on around me. There aren’t any dividers between economy and first class besides a curtain, and those people in the first few rows of economy were quite lively. The two guys ahead of me also struck up a conversation at about this time, so my nap was not very satisfying. To make things just a touch more frustrating, all that condensation in my window had frozen solid so the view was fuzzy as we descended into the Anchorage area. 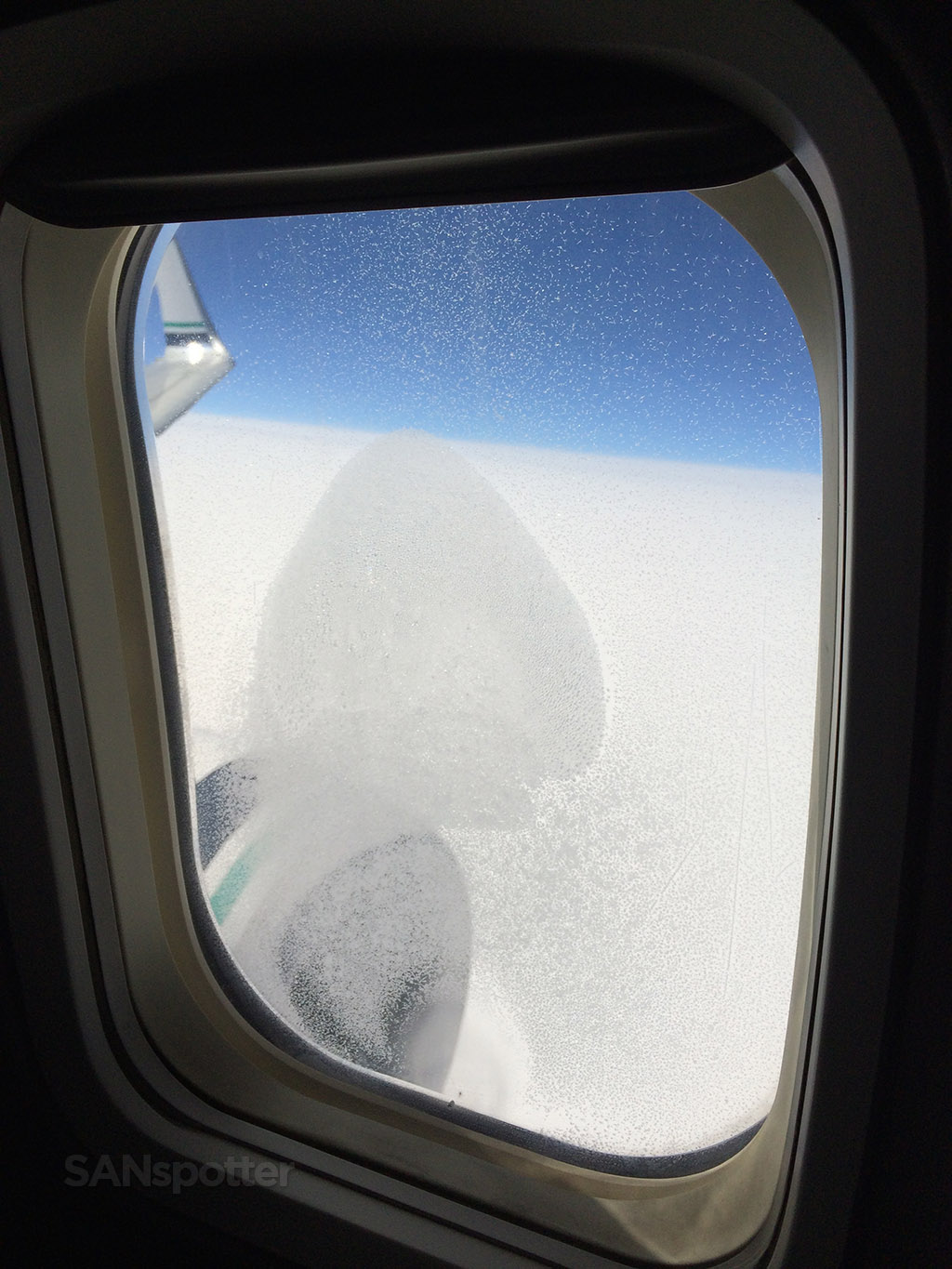 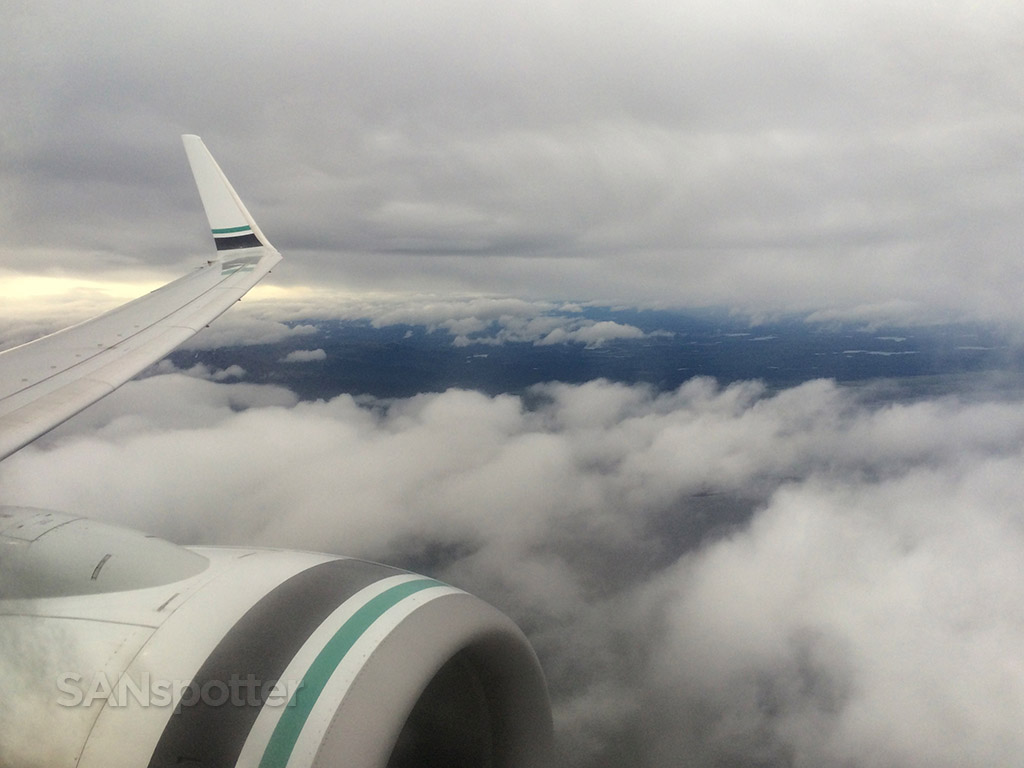 The ice on the window eventually thawed out as we descended into ANC, but it was pretty gloomy out there…

Last but not least, the teen boy sitting next to me was trying as best he could to get a view out of the other (good) window in our row so taking pics was difficult. Oh well – I was happy to be arriving in Alaska! 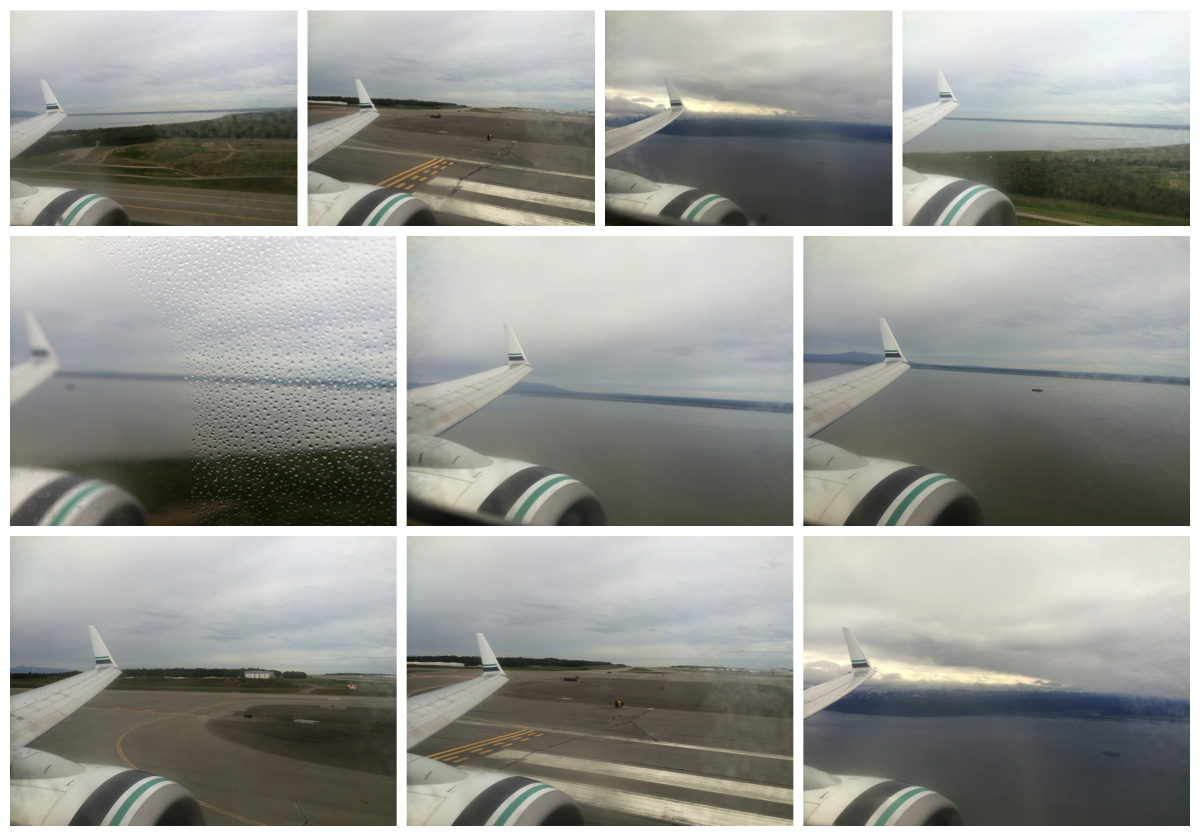 Dirty aircraft windows and an overcast arrival didn’t give me much of an opportunity for nice arrival pics.

We touched down on 7L about 10 minutes ahead of schedule concluding what was a noisy (but otherwise good) flight up from PDX. 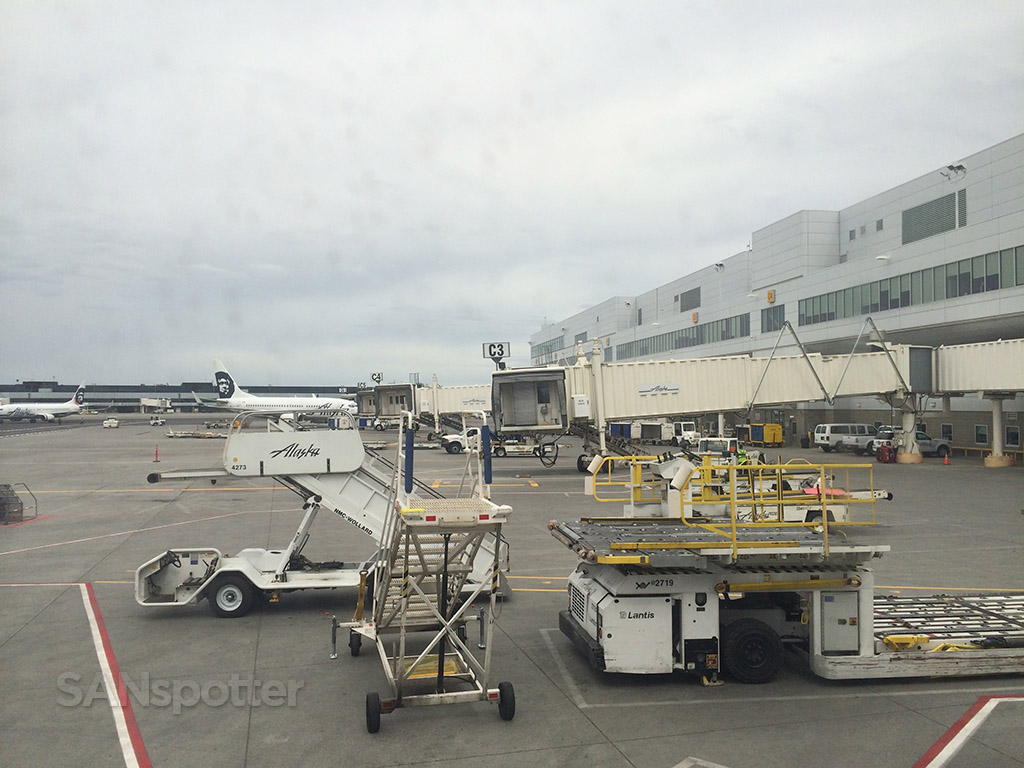 I made it to Alaska! This was the view out the window as I waited to get off the aircraft. 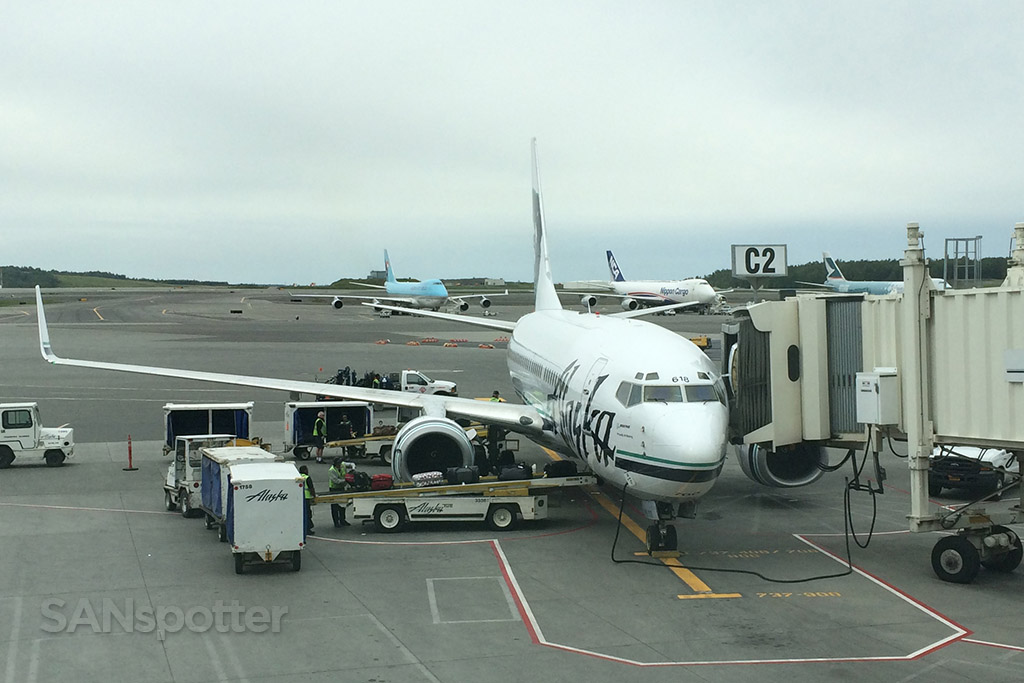 Love the cargo birds off in the distance here in ANC. This is a shot of the AS 737-700 that brought me up from PDX. 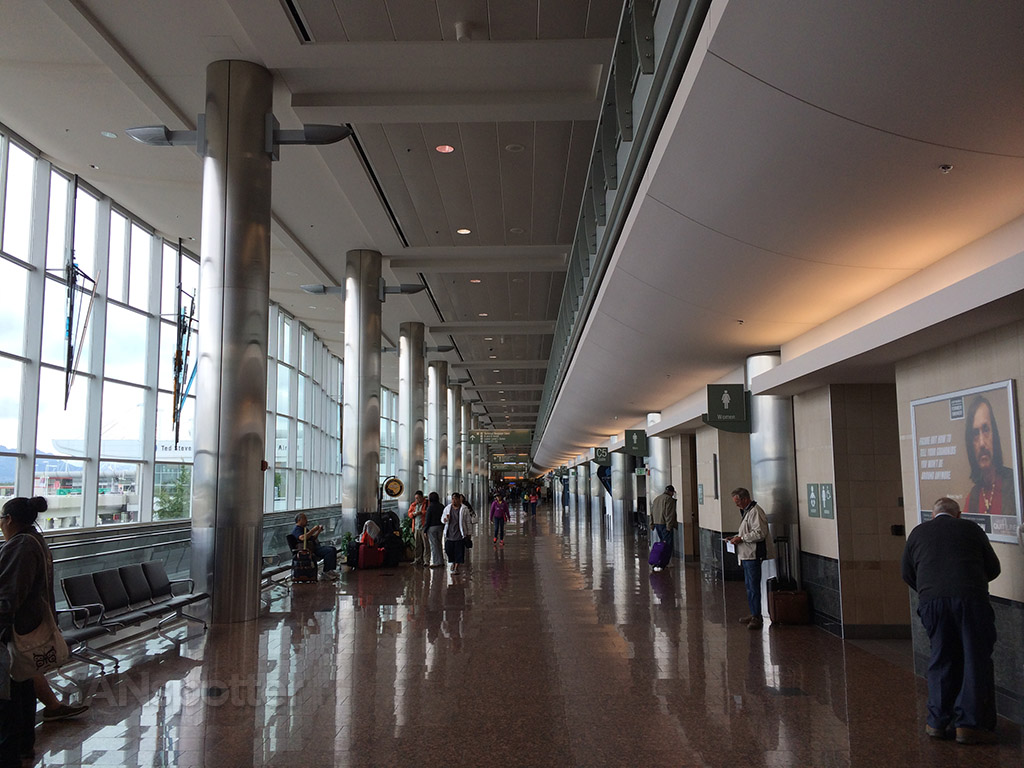 Walking through the C concourse upon arrival at ANC