I love LAX. It’s my favorite airport in the world, and I always look forward to flying in and out of there. Unfortunately, that doesn’t happen so often due to the fact that it’s two hours away from where I live in San Diego. It’s too close to fly to, and too far to drive – so what usually ends up happening is that I connect in other cities to avoid the small commuter aircraft that fly this route. I’m not a fan of small airplanes.

But it’s been far too long since I’ve flown through LAX, so I wanted to make it a priority for this trip. I would have preferred not to have it as my last segment on my return from Seoul, but that was the only the schedule worked.

Once clearing immigration and customs in terminal 2, I decided to walk all the way around to terminal 8. To some that’s considered a pretty long walk, but I had two and a half hours to kill and I really needed to stretch my legs after being on an airplane for the past 12 hours. It ended up being a really nice walk around – it’s been many years since I’ve last done that! 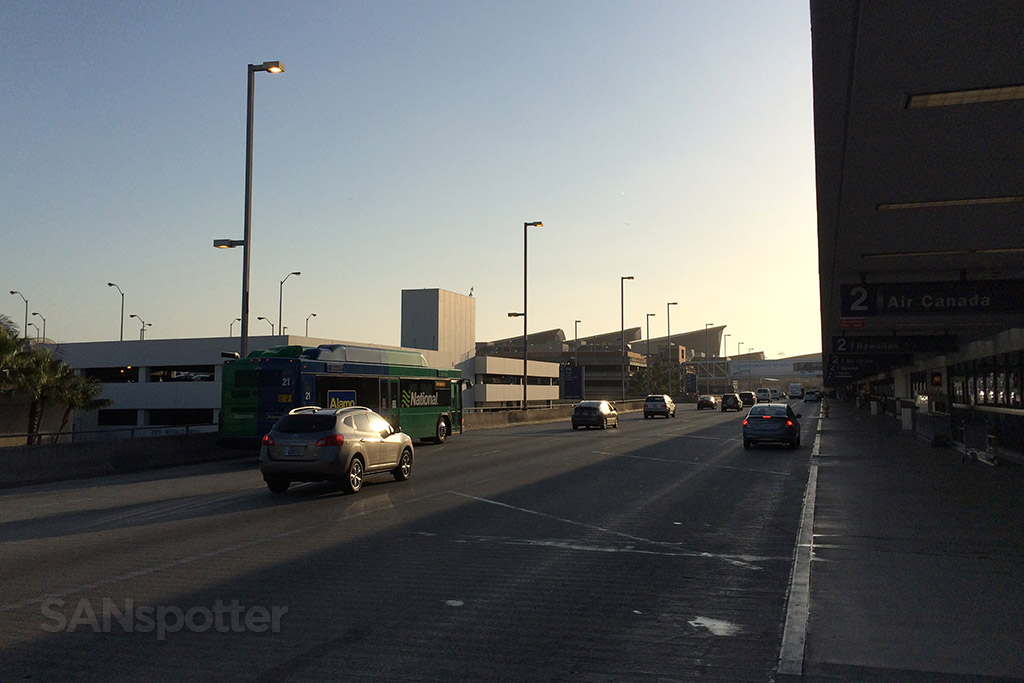 Outside terminal 2 at LAX on the departures level

Unfortunately, taking the time to walk gave me the chance to have a good look at how run-down and dirty my beloved LAX has become. I hate to say it, but other than the new Tom Bradley international terminal, the place is a dump. That’s a total shame, and I hope there are plans to give the other terminals a much-needed make-over once the TBIT is complete.

Going through security in terminal 7 (which is connected airside to 8) only took about 10 minutes, and I soon found myself Inside with about an hour and a half before my flight would depart to SAN. First thing I did was find a quiet bathroom for a much-needed teeth brush and face wash. Much better! I also took advantage of the time I had to exchange my leftover Korean currency back to US Dollars. 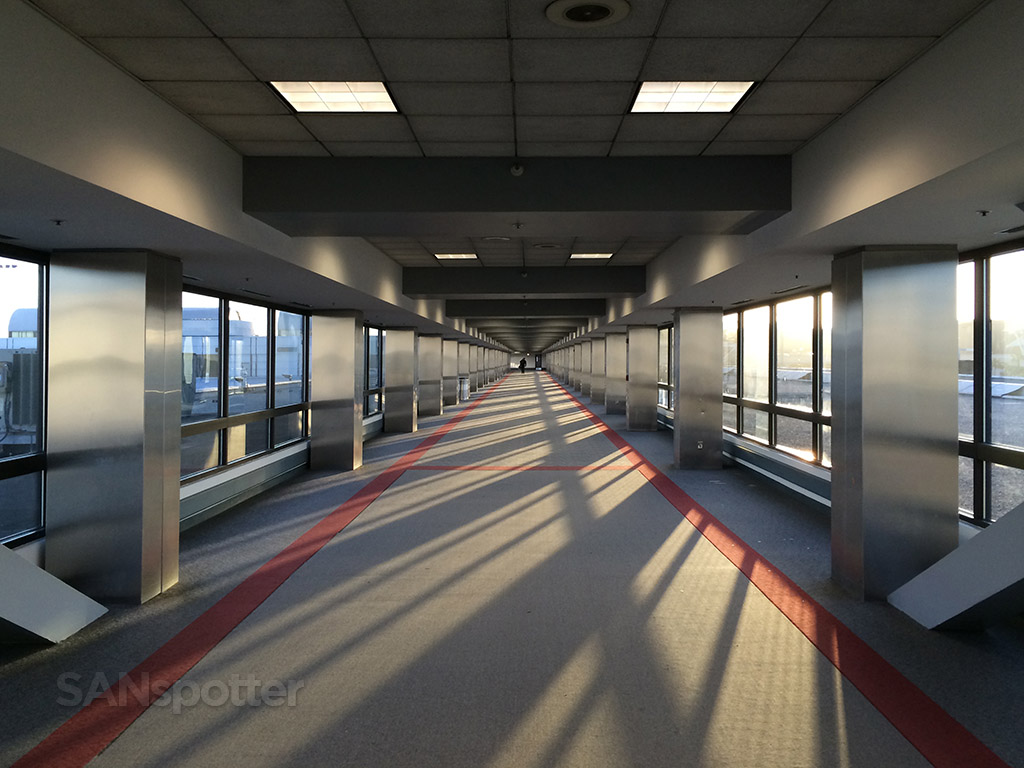 The airside connecting walkway between terminals 7 and 8 at LAX 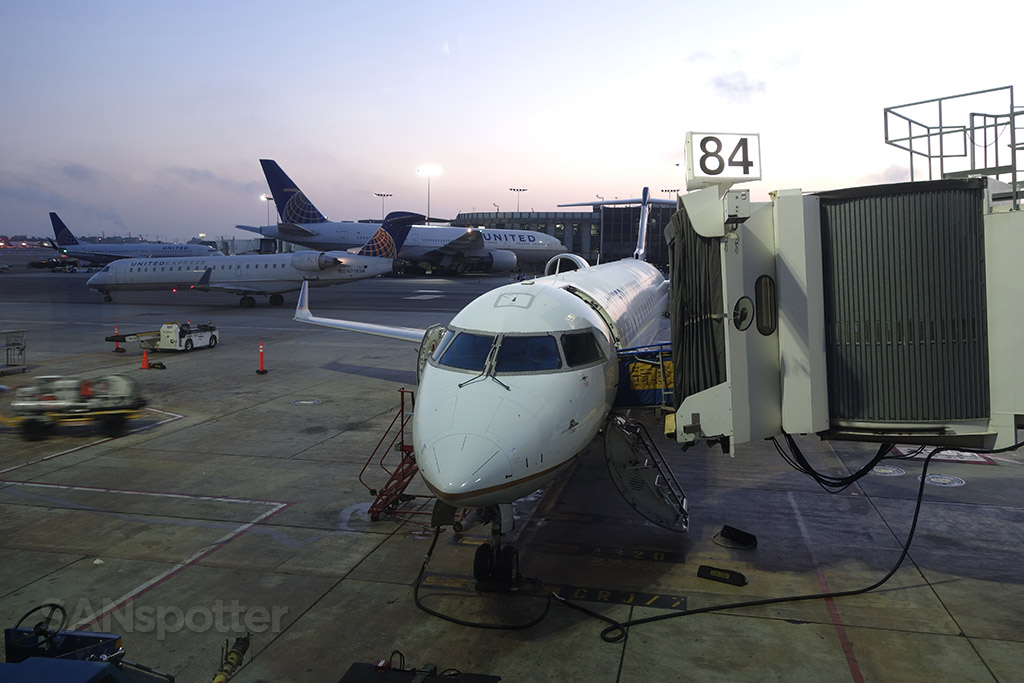 The view of the ramp from terminal 8 at LAX

Boarding was called right on time, and I was down the jetway, outside on the ramp, and into the airplane in no time at all. Even though I’m not a fan of small airplanes, I can’t complain about the speed in which boarding can be completed! 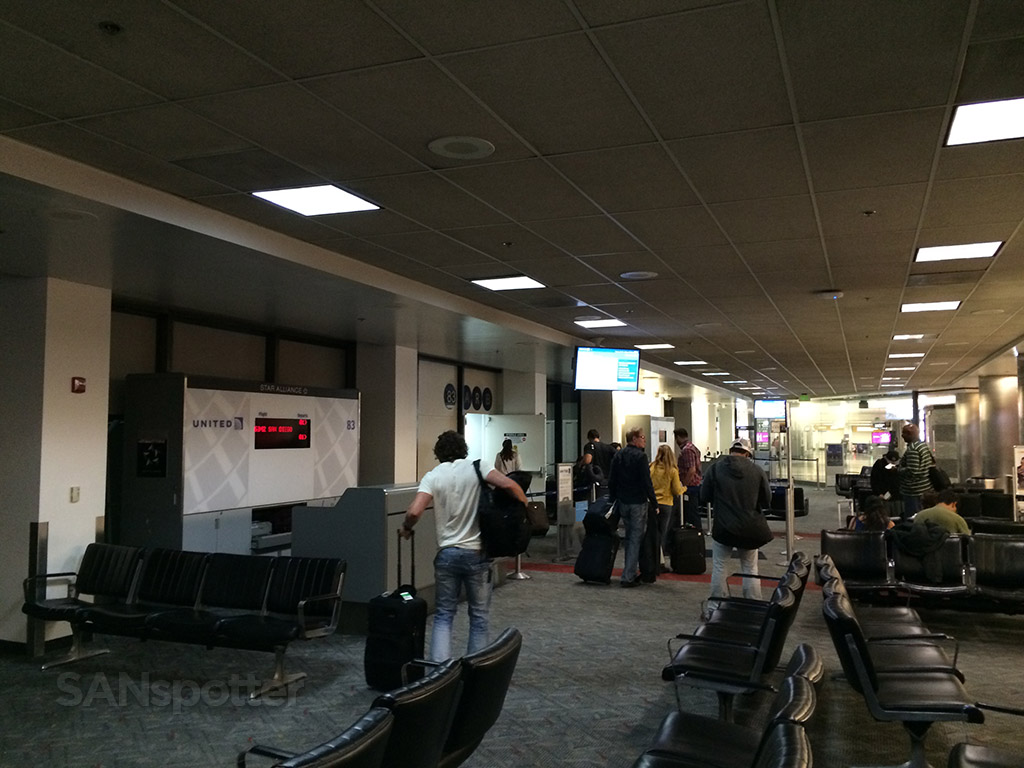 Boarding from gate 83 in terminal 8 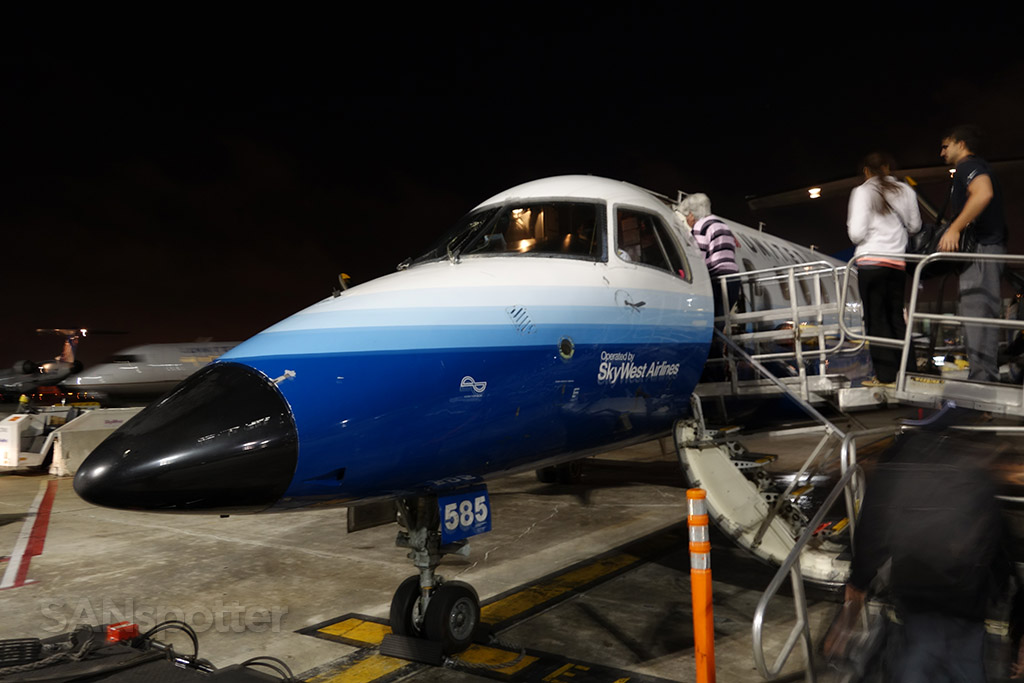 Boarding the EMB-120. Sorry for the blurry pic.

There was a slight weight and balance issue when boarding, and the captian initially thought that we’d have to leave some baggage or passengers behind, but they crammed everyone and thier bags into the plane at the last minute. The plane was literally stuffed – suitcases were strapped into seats, set on the floor at the rear, and two were even set in the cockpit with the pilots. I was concerned about the aircraft being overweight, but all I could do was trust the pilots. They are the professionals after all. 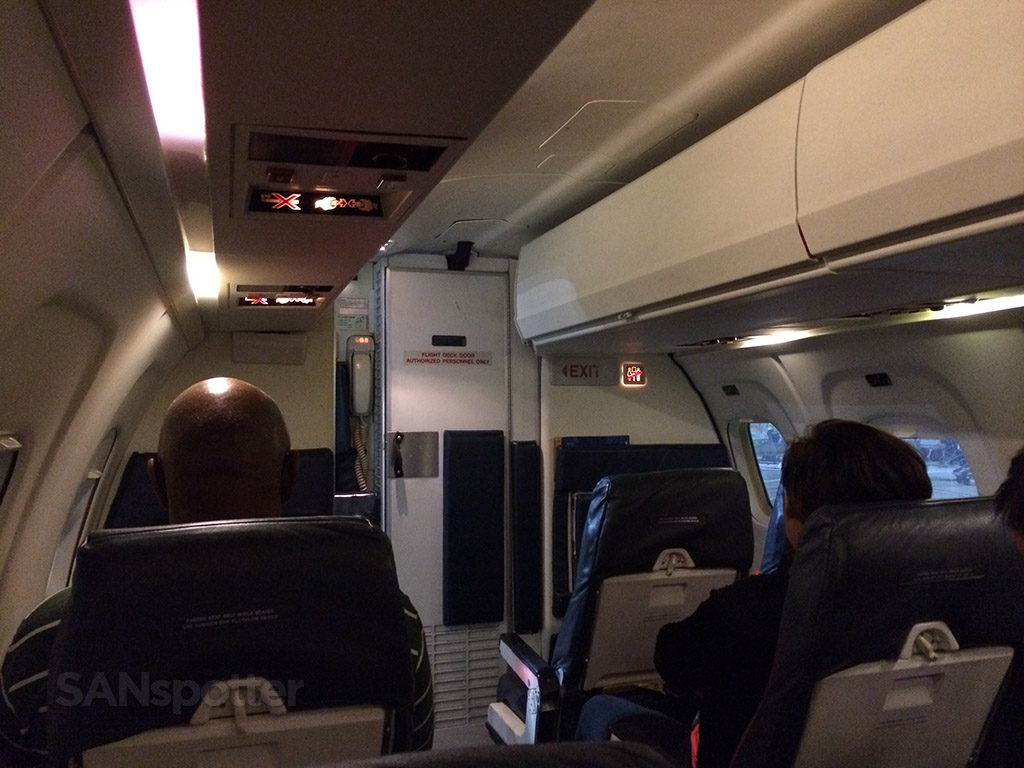 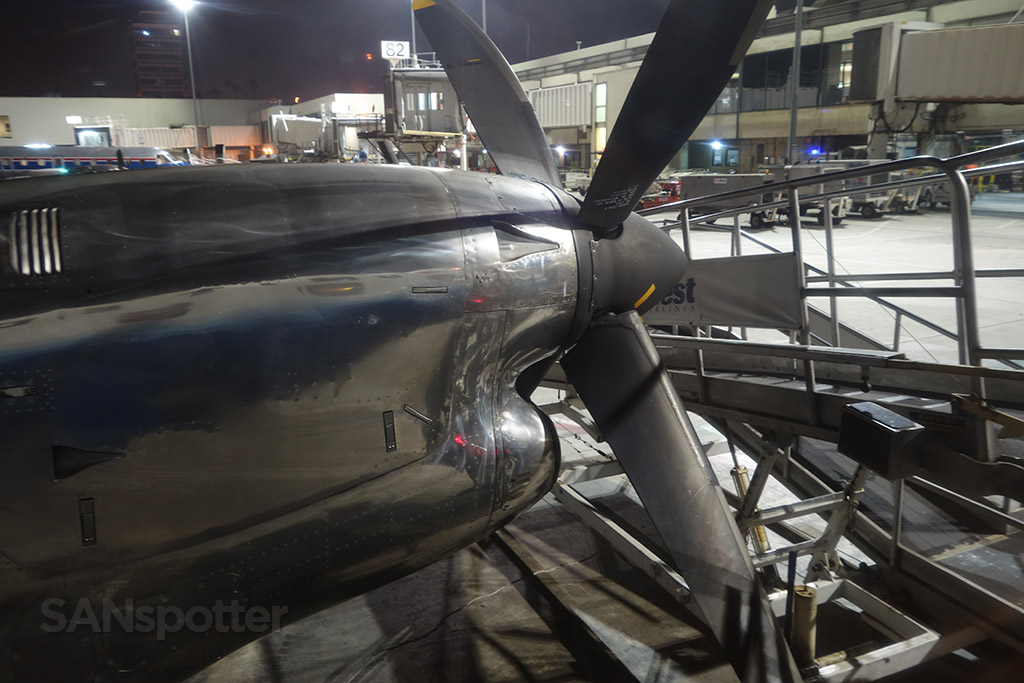 It was a short taxi out to runway 25R, and we were on our way in minutes.

There’s really not much more to say about this flight. I was pretty tired having started my day at ICN, and it was too dark to take any photos of the scenery out the window. There wasn’t a beverage service on this short 25-minute flight, so I just nodded on and off until we got close to SAN. I tried once more for some pictures, but didn’t really manage to capture anything interesting. 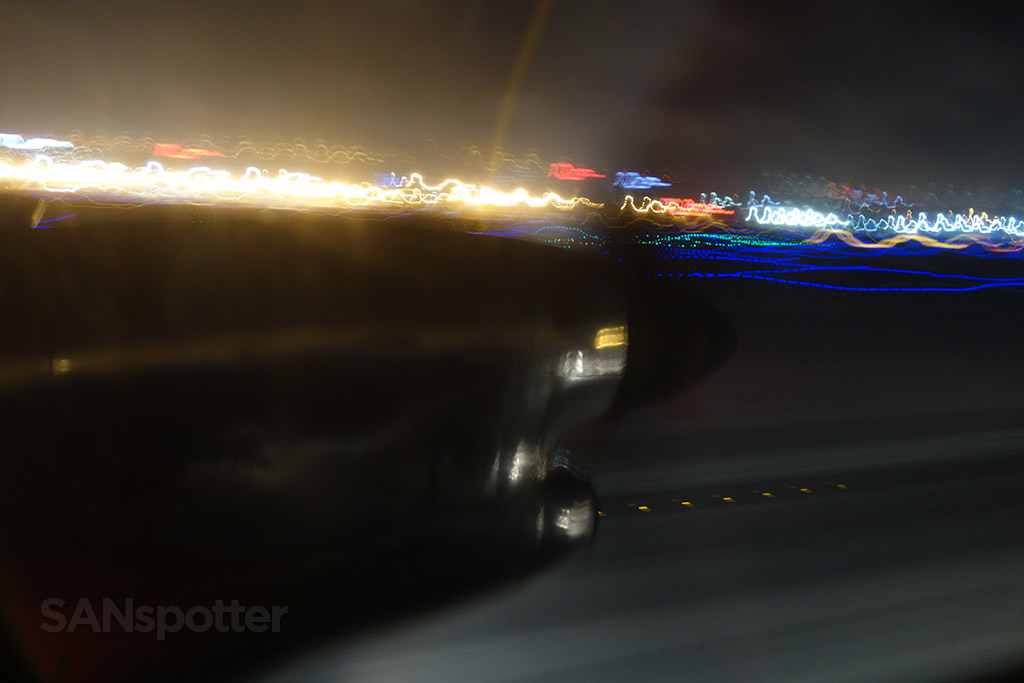 Beginning our takeoff roll down runway 25R at LAX 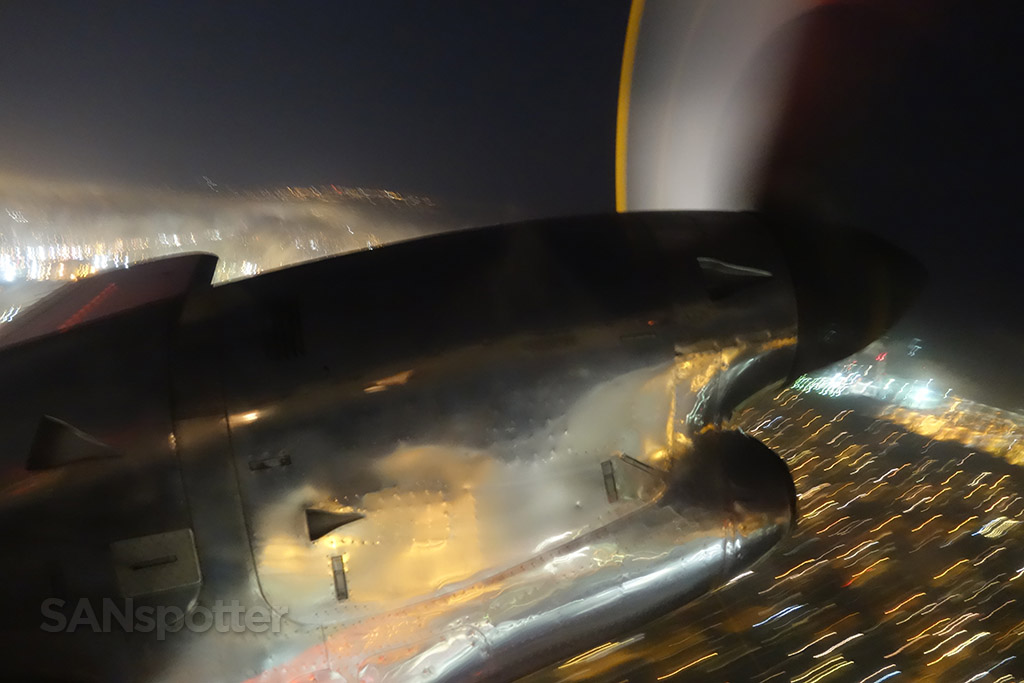 Climbing out of LAX 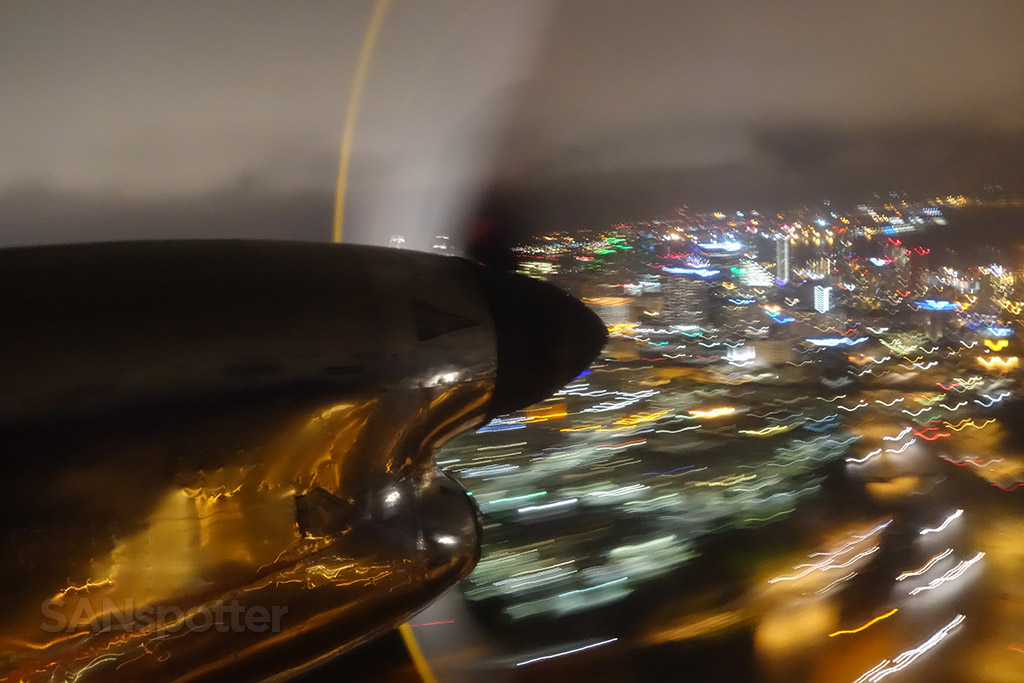 We touched down at SAN with a firm bounce right on time, and I was feeling very happy to be home once again. It was a really good trip to South Korea, and it all went off without a hitch. I got to fly two new airlines in premium cabins, visit a new country, and generally relax for a few days. Doesn’t get much better than that. Upon stepping out of the airplane at the commuter terminal, I turned around and took the final picture of this trip: 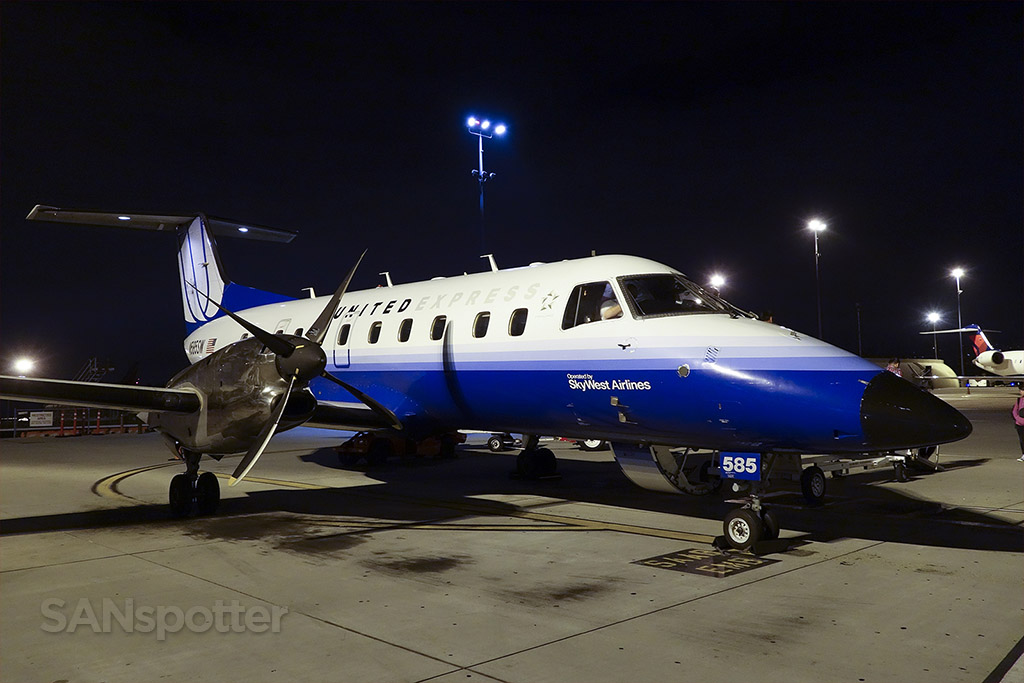 United Express (SkyWest) EMB-120ER at the commuter terminal at SAN

And that wraps up this trip report. Thanks for reading, and be sure to check back soon to read all about my next adventure!