I’ve got a special place in my heart for the San Diego International Airport (SAN). It’s my hometown airport, and I’ve spent years exploring that place in and out during my travels and aviation photography sessions. It’s not the perfect place to photograph airplanes, but it does offer some really nice opportunities if you’re willing to be patient and use a bit of creativity.

1). There is only one active runway at SAN (27/9), and the angle of it is situated so that the sun basically rises on the east end of the it, and sets on the west. With the sun farther to the north in the summer, photography isn’t ideal at all because the sun will be situated directly over top of the runway from sun up to sun down. Winter is better though – October through March is acceptable due to the sun being farther south in the sky (and thus south of the runway).

2). The best place to view airplanes is in the small parking lot on the corner of Laurel and Harbor Dr, on the southeast corner of the field. This is a dedicated and recognized viewers lot by the airport authority and San Diego Harbor police, so you will not be harassed for taking pictures or just watching airplanes from here. You’ll need at least a 200mm lens for acceptable photographs, but 400mm is ideal. Here is a map showing that exact spot:

3). The only problem with that dedicated viewing lot on the corner of Laurel and Harbor Dr is that the perimeter fence is high and you will need a large vehicle to sit on to see over it. I’ve never seen anyone use a ladder here, so do so at your own risk. I would think it would be ok as long as you are not too close to the fence. The police don’t have an issue with people sitting on the roof of large vehicles – I see it all the time and they just drive on by.

4). Traffic is steady all day long, both coming and going. The most common thing you’ll see are Southwest Airlines 737’s, and pretty much everything else will be a 737 0r A320/319 of some kind. There are a few exceptions, the most notable being the daily Hawaiian A330 to HNL, the daily British Airways 777-200 to LHR, and the daily Japan Airlines 787 to NRT.

Here are a few sample photos from the spotting lot at Laurel and Harbor Dr:

If you look to the east, you can get some of San Diego’s downtown skyline in the picture as the planes are on final approach (shot at 235mm): 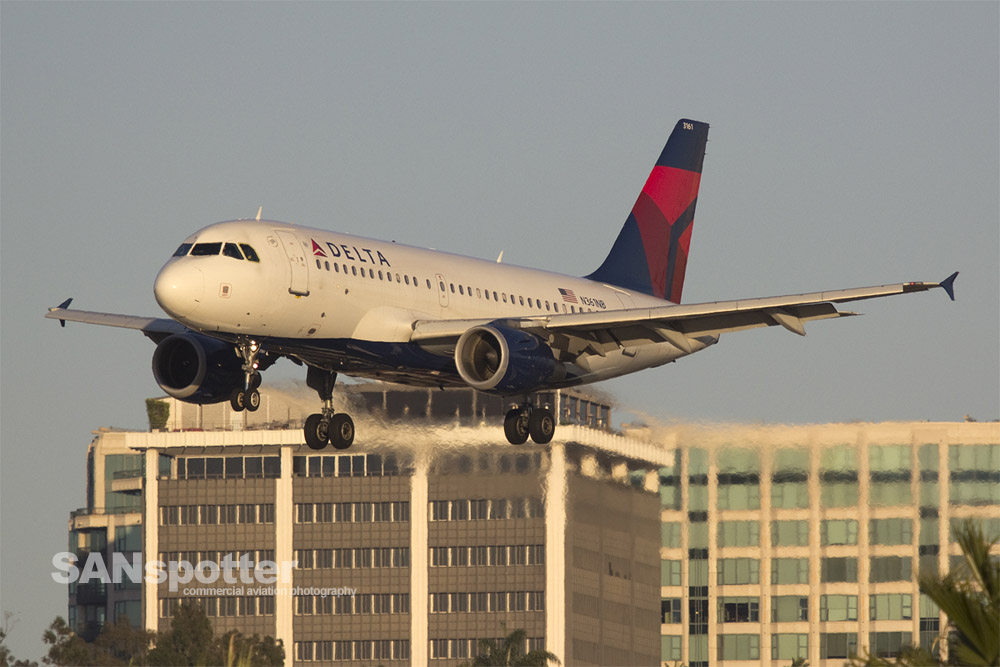 Delta A319 on final approach at SAN

If you look to the west, you can get touchdown shots like this (shot at 235mm): 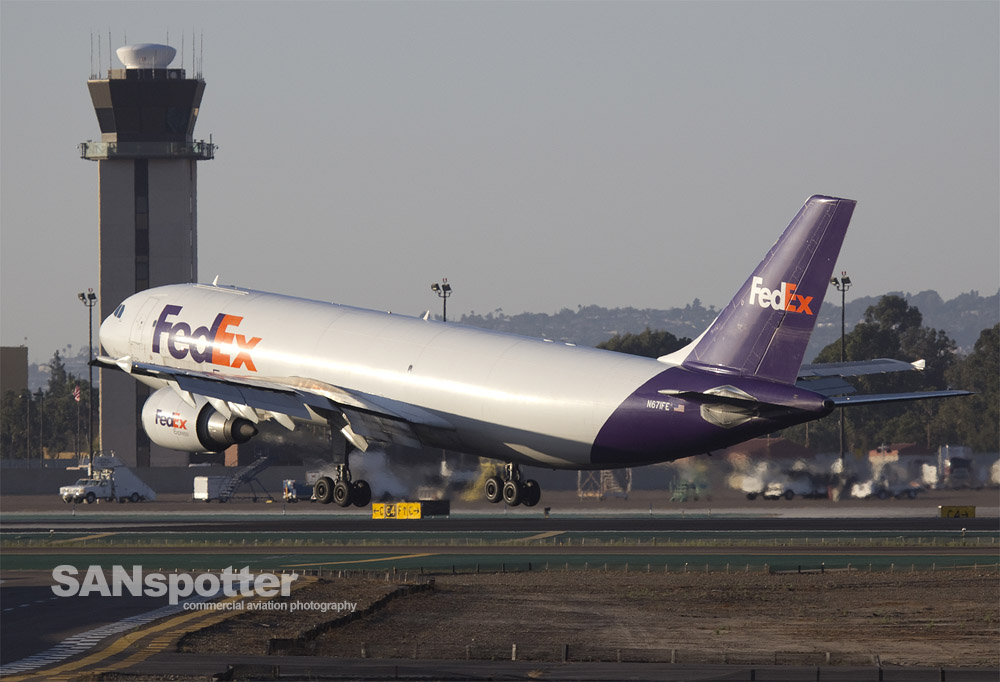 FedEx A300F touching down at SAN

And it’s super easy to get taxi shots like this. Be careful of heat haze though – these kinds of shots are tough to get during mid-day (shot at 250mm): 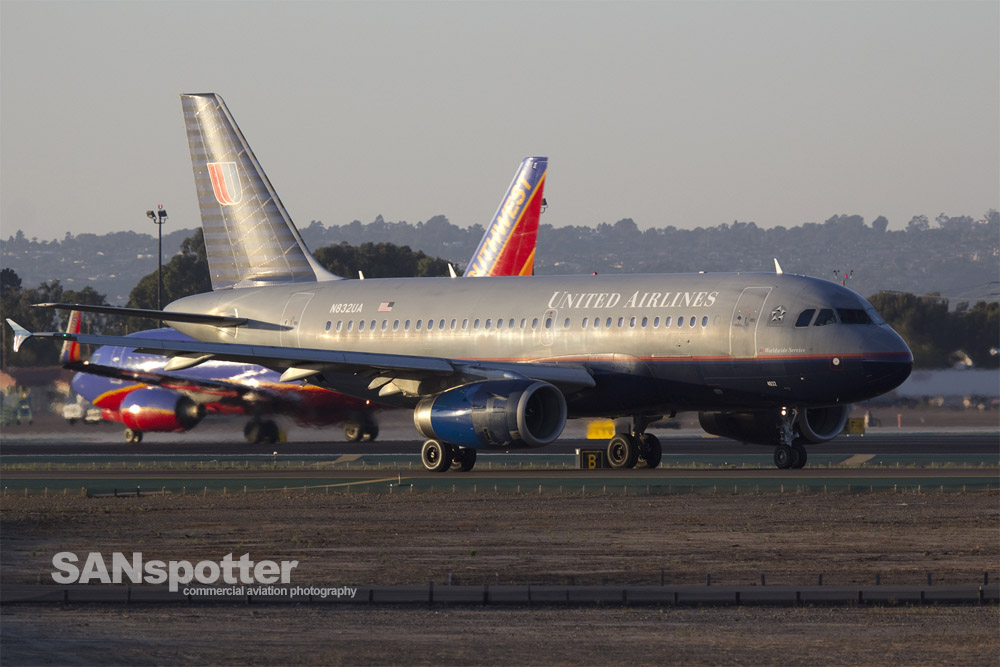 A United Airlines A319 rolling out to runway 27 at SAN

5). Inside the terminal, the big windows of Terminal 2 West is your best opportunity for great pictures. The commuter terminal, and Terminal 1 are small and cramped, with very small windows. I’ve never had any luck with photography from these spots, but it’s possible if you time things just right. But Terminal 2 West is much better. It’s big and bright, with excellent views of the ramp. The sun angles are pretty good all day long too – as the sun moves across the sky, there are many places from which to take photos with the sun behind you. Just walk around, and you’ll see. Terminal 2 East is ok too – it’s smaller and more crowded (making photography difficult). Here’s an example of a shot taken from Terminal 2 East, looking towards Terminal 2 West: 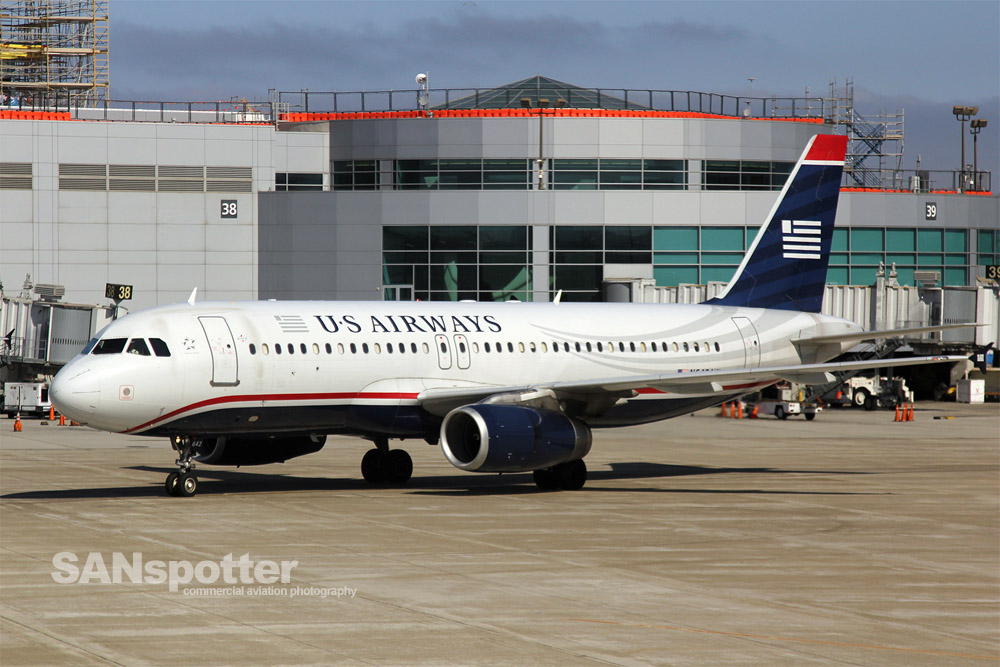 USAirways A320 in San Diego as seen from Terminal 2 East

6). A word of warning about shooting from inside the terminal: I have been approached before (just a couple times) from TSA agents telling me that taking pictures of airplanes is prohibited. Now, we all know that’s BS, so just be prepared to move on to another spot if you’re called on it. But most of the time, I don’t have any problems.

7). Finally, you can shoot departure shots from Spanish Landing. It’s an open park located directly across the street from Terminal 2 West, and if you’ve got a long lens, you can get shots like this (taken at 300mm with my 100-400L): 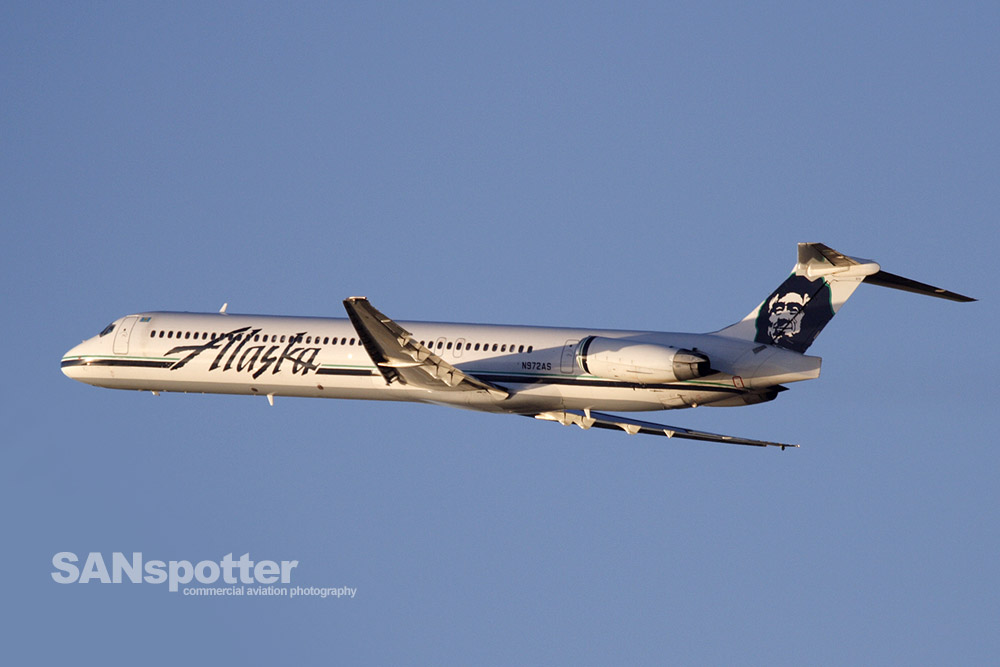 That pretty much sums it up. For a better idea of what kind of photography is possible from SAN, you can check out my photo archives.